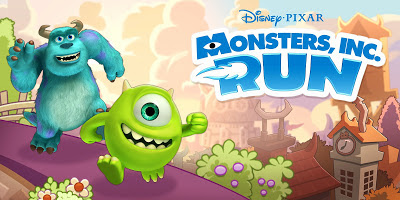 Despite my current trend of disappointment with blockbusters this summer so far, I am really excited about Monsters University. I have faith that Mike and Sulley will turn it around! Unfortunately, the IPhone/iPad app Monsters, Inc. Run has done little to put me into a Monsters State of Mind.

The concept for the game is pretty simple. You start as Mike running from left to right on the screen filled with obstacles and bonuses. The character can move vertically in one direction and horizontally up and down. As you run you can pick up coins and may even hit power-ups that temporarily gives Mike special abilities or turn him into the taller and stronger Sulley. Also, those coins can be used to buy abilities outside of the game play for future use. Additionally, there are three bonus items hidden throughout each level. To complete each level, your monster has to reach the end without falling to its doom. 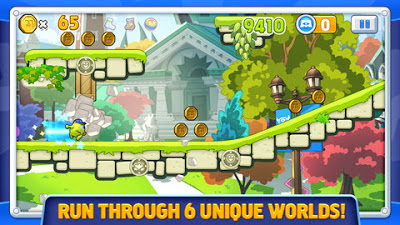 Monsters, Inc. Run has never really worked for me, on an emotional level. I was drawn to it because I thought it would be another Disney branded version of Temple Run Brave. It is not. To me, the closet game I can compare it to is Super Mario Brothers for old school NES. In Mario a character could retry jumps simply by backing up within the visible game area. I find myself frustrated by my inability to back up three to four steps in Run to make a better jump or hit an angle that I missed. Additionally, you cannot stop Mike and Sulley from moving ahead during the game. I honestly would probably really enjoy a Mario game with its original aspects branded to Monsters over this similar, but frustratingly different game. 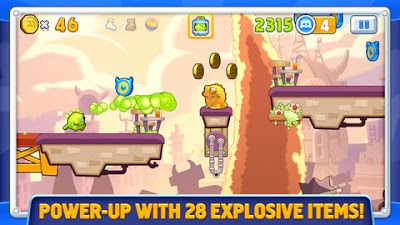 I still stand beside the idea that a great way for Disney to market movies is offering cheap and enjoyable games applications. I really thought that Temple Run Oz was more enjoyable than Oz the Great and Powerful and the game made me want to see the movie. Temple Run Brave continues to occupy free time as I still replay it often. While, the Between Kids think that Monsters, Inc. Run is great, I have never stumbled on them playing it. Sadly, for me, Monsters, Inc. Run fell short in furthering my excitement for all things Monsters.

Good thing I can still count on Mike an Sully!?  I mean this movie cannot let me down right?