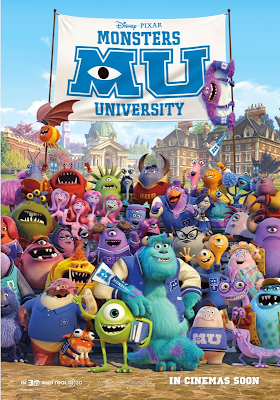 We now know where all the top scarers got their education!  In this Pixar prequel, we follow Mike and Sulley as they start they scarer education at MU, Monster's University.  Mike is a bright overachiever who knows everything about scaring.  Sulley is the entitled scaring legacy, trading on his dad's name to get respect in the classroom.  The two are thrown together, along with the boys of Oozma Kappa, in an attempt to win the Scare Game to keep their good academic status in the scarer program.

What I wish I could tell you is that I loved Monsters University.  I cannot say I loved it.  And I cannot say I hate it!  Honestly, I just do not have strong feelings for Monsters University one way or another.  I thought it was good, but not great.  I will likely purchase it for home when it comes out, partially because the Between Tween really like it.  The Between Kid though was ready to go when it was over and said it lasted a long time.  I would probably rank it in the middle of the Pixar productions, and I really wanted to love it (I say sitting here in my Monsters University t-shirt).  Here are my thoughts about this Mousey Movie:


I was tickled that I found the John Ratzenberger cameo, which was classic as always.  But I never did find the Pizza Planet truck.  Though I think the inclusion of A113 is perfect based on its college origins.  And there are some other homages to the other Monsters movie that will probably give you a light chuckle.
I think Disney fans are likely to enjoy this film, along with the general public.  And based on other movies I have seen this summer it deserved its smash opening weekend.  Everyone who reads this blog, is probably going to see it in the next few months.  Monsters University is a good movie, but not an instant classic.
I just wish they would let me signup as a student!