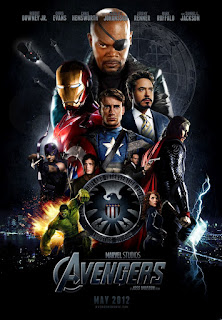 I have been waiting years for the fulfillment of a promise.  In Iron Man Samuel L. Jackson as Nick Fury told us he was looking to get the Avengers together.  Now Marvel and Disney have paid off on this promise, and most fans will not be disappointed.  If you like action films, if you enjoy things going boom, and if you love superheroes, The Avengers is probably going to be a hit for you.  Here are my initial thoughts about the film after a very early morning viewing (as spoiler free as possible):
·         Laugh-o-Gram:  I underestimated how funny this movie was going to be.  Quick quips, puns, and fun dialogue are traditional comic book tools.  And we have seen some humor in the past films.  But in The Avengers the fun lines are ramped.  I really should have expected this because Joss Whedon wrote the story and screenplay.  Overall my experience with his work is limited.  But the one franchise of his that I love is Firefly which shares this type of witty dialogue.  I quote Firefly lines all the time!   I cannot really tell you all of the lines that clicked with the audience because I missed some payoffs because everyone was drowning out the audio laughing.  I do think Whedon gave the best lines to Robert Downey Jr. as Tony Stark/Iron Man who continues to shine in this role.

·         Agent of S.H.I.E.L.D.:  We have been introduced over the years to agents of S.H.I.E.L.D. including Nick Fury, Phil Coulson, Black Widow and Clint Barton/Hawkeye.  These agents have also been support but never the stars.  In a film with heavy hitters like Iron Man, Thor, Captain America and Hulk the characters that get the most development are these agents along with the newest member of S.H.I.E.L.D. Maria Hill.  With the big guys we have seen them developed in their own films, so it honestly fells like these are the characters who should be built out further.  Honestly, these are the characters you will probably look forward to the most in the future.

·         Reality Check:  So villain wise this is probably the most ambitious of the non-human villains to date, therefore a ton more of CGI.  Yet I still felt like these alien invaders fit within our world and were believable.  I think an element that works to help establish reality are heroes with basic earthly weapons.  Having Black Widow and Hawkeye with guns and bows sprinkled throughout scenes with CGI villains and heroes helps to ground the image in our world.

·         Fearless:  The Avengers breaks the expected conventions.  So be prepared for a ride.  In The Incredibles we get an education on some of these clichés, like monologuing for example.  In The Avengers the story breaks these clichés.  Characters do the things that you would want to do in the real world.  If this was a horror movie, somebody on the screen would say “hey don’t be foolish and walk into the woods unless you want to die first.”  And the story takes risks.  I had done a really good job avoiding spoilers and I am glad I did because within the first 15 minutes something I had not expected had happened and changed what I thought of the story rolling out in front of me.
As a side note, The Avengers is not really a Mousey Movie except for links to the other films in the Marvel Cinematic Universe.  But I will not be pointing fingers.  There is a lot happening in this film and I would not ask for them to force in hidden Mickeys just to impress a Disney fan!  No, I will take The Avengers as it is a popular and growing Disney franchise that we will love for years to come.  I am sure many of you will be assembling with your fellow avengers at a theater near you, maybe even for a second or third time.
Posted by Between Disney at 3:20 PM