Between Books - Polishing the Dragons 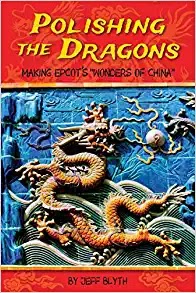 And I made a giant one when reading Polishing the Dragons.

Polishing the Dragons: Making Epcot’s “Wonders of China” by Jeff Blyth recounts Blyth’s roll in directing, writing and leading the team in creating the Circle-Vision 360 films which was displayed for over 20 years.  Blyth provides a detailed account of the production of the film based on notes he kept when making the film in the 1980s.  Blyth discusses how the film came to be, his pre-production scouting and the actual filming in China.  He also discusses his contributions to the refreshing of the film to become “Reflections of China” which replaced it.  Along with Blyth’s text, he includes numerous color photos of locations, scenes and the crew working to create this long-lasting Epcot production.

Did I mention I made a mistake?  Okay, maybe I made at least two.

Mistake number one, in all my trips to Disney I have never watched a Circle-Vision 360 film.  I can give excuses, but in the end it is just true.   To me the novice, Blyth demonstrated to me that these productions are complex and challenging.  Blyth takes his readers through site selection, how can one get a strong 360 degree shot and hide the crew?  He shows how hard actual filming can be, as one has to keep 9 cameras level with clean lenses and enough film to capture the moment.  Oh and for Blyth’s adventure, how do you explain how this process works to an inexperienced crew who has never seen a 360 degree film through a language barrier.  And maybe the American crew members are not overly excited with all the country has to offer.  The reader is left with an understanding of the complexity of these productions and the dedication of the crew to complete the process and meet their deadlines.  I will make sure that next time I am at Epcot I will see a 360 film.

Blyth’s writing also gives us insight into a time in China’s history largely hidden from the West.  Blyth was an American in China during a time where the country was largely closed.  So his experiences were often unique with him visiting areas largely unseen by other Westerners.  We also get a window to negotiations with the People’s Republic of China who in the 1980s were using this film to help introduce the world to their nation.  But at times, it is clear they very much wished to control that introduction.  And yet Blyth may have been the one Westerner to claim a victory over the People’s Liberation Army at this time with him getting some filming concessions.  For those interested in Chinese history, this is an enjoyable and informative first-person narrative of this time period.

Mistake number two, I read this as a Kindle book on Kindle Unlimited.  Now I love seeing a Disney history title in the service but I should have paid for the physical book.  The Kindle really does not highlight the images and for me they were to small to explore.  The page also makes it clear that this is not printed on normal paper but has a stylized layout and mood that screams personal journal to me.  Bamboo Forest Publishing put considerable design effort into this production.  Despite generally being happy with reading Kindle books, I just wish I had read it as a physical book.

Mistakes were made in reading Polishing the Dragons.  I really enjoyed this text which allowed me to travel to a part of the world that currently is barred to me due to global travel restrictions at a time in history where it was largely hidden to the West.  And I learned about both film production and the specialized Circle-Vision process.  This text is one that I highly recommend to Disney fans and even non-Disney fans interested in China or film production.

Posted by Between Disney at 2:59 PM No comments:

Between Books - Disney Maps: A Magical Atlas of the Movies We Know and Love 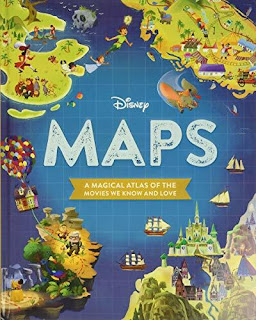 Disney Maps: A Magical Atlas of the Movies We Know and Love is a book I struggled to match an audience with.  The book is fairly simple.  The book highlights 24 movies from Snow White and the Seven Dwarfs to Coco.  For each movie featured is a two-page fun map with landmarks and geography from the movie.  There is a page of movie highlights and facts.  And there is a page of characters.  The book also contains a forward by Pete Docter discussing the importance of geography in telling stories.

So who is the audience.  The most basic answer is kids.  The maps and images are fun.  And the facts are fairly simple, like Wikipedia simple.  But the price point of the book at around $20 is really not something that screams buy this for the kids.  The audience is not the adult Disney fan.  The art is cute and interesting, but it is not art of historical significance or produced by Disney legends.  It is just cute and sometimes interesting art.  An adult reader like me might get lost in the art trying to make sense of it at times, I mean Radiator Springs is perfect but the scale is fantastical for The Incredibles.  So maybe one should not take it so serious.  I also attempted to play Where’s Waldo with some of the character pages collating them with the map.  But honestly they were mostly way to easy to find.  To me the audience fit at the moment are adults buying a gift for a child under five and want to give a handsome looking volume with engaging images.

In the end, as an adult Disney fan, this was cute but did not provide history or insight for me.  And for kids, the price point is a little too high.  Perhaps a cheaper soft cover would make this title find its true audience a little easier.  And also that could get more adults to buy this volume as a gift.

Posted by Between Disney at 4:26 PM No comments: 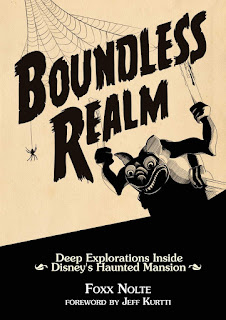 This is not the book review you are looking for!

I have heard endless praise of Foxx Nolte’s Boundless Realm:Deep Explorations Inside Disney’s Haunted Mansion.  That praise was coming from voices that I know and trust especially for Disney history topics.  I was really looking forward to a deep dive into the history of the Haunted Mansion.  But I do not know if I got the book I was hoping for read.

Boundless Realm is an exploration into the Haunted Mansion by a former Walt Disney World Haunted Mansion cast member. The connection is telling as this book is really one written with love and care.  And the book provides us all with what we expect from a Haunted Mansion history.  Nolte tells us of her personal background to the attraction.  Then Nolte dives into the history of haunted attractions especially in the 20 century.  Finally the author leads us through a series of essays that is also a guided tour of the Magic Kingdom’s house with connections to the Disneyland and other global houses.  Along with history, Nolte provides thoughts and additional insights to the Haunted Mansion, including nothing architecture of the attraction that only cast members can see.

I think I am probably the least enthusiastic reviewer of this book.  I think it is expectations.  Reviewers who like history books like me love this book.  So I assumed this was a just the facts type of history.  This is not what the text is to be.  To me this book is informed speculation.  Nolte has a deep and rich background with the Mansion.  I would love Nolte to take me on a tour of the attraction.  And Nolte makes inferences that I am simply not informed enough to make or back.  So on several occasions, Nolte makes a statement that is logical and perhaps correct but may not be backed by documentation or interviews.  And as a reader at times I feel positioned to question the speculation.  And perhaps that is the intent and provides some great natural tension.  But is it not a text I would go to argue a fact but instead to show possible positions on the history of the Haunted Mansion.

For me Boundless Realm was not the book I expected or hoped for.  But it did teach me a very important point.  Sometimes the best things are not fully planned, because in the end we may never have a definite and complete history of some of our favorite attractions due to the numerous and often unknown contributors to their construction.