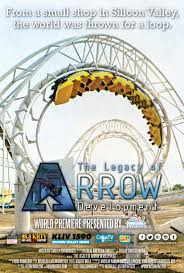 The Legacy of Arrow Development is offered by American Coaster Enthusiasts for free on YouTube!
This 70 minute documentary provides an in-depth history to the creation, popularity, decline and legacy of Arrow Development and its impact on the theme park industry.  Arrow is often the unspoken of partner for Disney parks, developing Imagineering concepts into physical rides.  These legendary rides include The Matterhorn Bobsleds, it's a small world, The Flying Saucers and so many more.  It would not be an overstatement to say that the Disney parks that we know today would not look the same without the contributions of this ride engineering company.
The documentary starts with the formation of the company with veterans of the American industrial machine from World War II.  The founders lacked capital and in some cases experience, but had practical engineering knowledge and a strong work ethic.  The company built a number of offerings, but began to specialize in small amusement park attractions.  Eventually, the Karl Bacon and Ed Morgan led company caught the eye of Walt Disney, who often relied on Arrow Development to make his Imagineering visions into realities.  Arrow Development would continue to grow and would provide attractions to non-Disney parks.  And with the passing of Walt Disney, the company's use of Arrow was largely discontinued.  Arrow then serviced numerous parks, often building large and fast roller coasters.  But with the changing of leadership, numerous sales, and declining market share the Arrow name largely disappeared as the company was sold to another amusements engineering firm.
I do not really watch YouTube, and never for 70 minutes.  But The Legacy of Arrow Development is a true documentary that needs to take notice and kept my attention for the entire time.  The presentation, really highlighted why Arrow was important and how its legacy continues to this day.  Additionally, for the Disney fan that wider impact outside of the Disney parks is sufficiently felt.  And it cannot be forgotten, this is a free quality professional look into the theme park business focusing on one of the engineering pioneers of the industry.  I was worried that it would feel like a fan film.  Instead it is well-researched with interviews from those who worked for and with Arrow.  The film also looks straight on to the eventual fall of the company, with an explanation of why.
The Legacy of Arrow Development is a Mousey Movie that Disney parks fans will want to watch.  It provides a great historical look at a Walt Disney partner and ally.  As without Arrow Development, the theme park that we have today would not exist.
Posted by Between Disney at 3:23 PM No comments:

Between Books - The Great Crump Presents HIs Magic 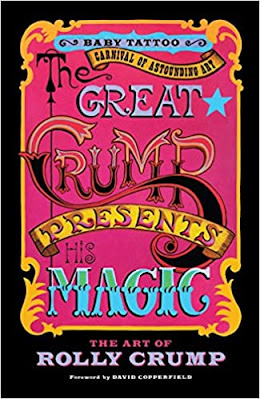 The Great Crump Presents His Magic: The Art of Rolly Crump provides a visual catalog to the Rolly Crump exhibit from the Oceanside Museum of Art in 2017-2018.  The text is short on text and heavy on images.  Other than forewords and two essays, the text is all pictures of Crump's work on glossy pages.  Other than title and  year captions, readers walk through the exhibit in a self-guided tour of Crump's paintings, sculptures and other artistic endeavors.  The concluding essays are offered by artists who reconstructed lost Crump treasures, the Gypsy Wagon and the famed Tower of the Four Winds.
The volume is a visual feast, allowing readers to walk through 60 plus years of Crump's career.  Many of the images will seem familiar to Disney fans, such as toys from it's a small world or Haunted Mansion concepts that are famed for what the Haunted Mansion could have been.  But there is much more including his Doper posters, which gave Walt Disney a chuckle, still lives and small funny sculptures.  Really funny is one of the two themes readers will follow in the catalog as Crump's work consistently shows a quirky whimsical sense of humor.  The other theme that will become obvious is that Crump has a mastery of lettering, which is visually striking and provides clear communication.
The Great Crump Presents His Magic is a visually fun volume which highlights the humorous side of Disney legend Rolly Crump.  A volume lacking words, it is often left to the reader to self examine Crump's work and legacy.  And it is surprising being a visual only book, it is not one that a reader will rush through but take the time to linger and examine.  And for someone who is Between Parks and not able to see the original exhibit, it was a chance to experience a different kind of Disney history and art.
Posted by Between Disney at 1:08 PM No comments: