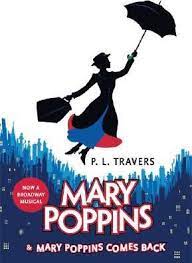 For years I have had a copy of Mary Poppins & Mary Poppins Comes Back by P.L. Travers sitting on my Between Books shelf, but I have never had a chance to read it.  Recently, I decided to pick it up and dive into the story that was a key Disney movie moment.  As I read through it, I realized how factual another semi-fictional Disney film actually was and the challenge this story presented.

Mary Poppins & Mary Poppins Comes Back by P.L. Travers collects the first two books of Travers' Mary Poppins series.  The titles consist of a series of short stories detailing the interactions between the magical nanny Mary Poppins and the four, yep four, Banks children.  The characters will feel familiarish to anyone who has seen the Poppins films.  And the stories will occasionally remind one of the movies as we travel into China bowls or visit a laughing uncle.  But overall, the stories are generally not connected and provide short incidents, which are often confusing and nonsensical, with the Banks children.

When we hear the story of the Disney movie, we are told that Walt's children loved these stories.  But to be honest, I did not.  They really are confusing at times and I often feel like the characters are not that approachable.  If anything, reading through these makes it clear how factual Saving Mr. Banks is, as it would have been impossible to make a straight adaptation of this writing into an engaging movie.  In short, the Travers' stories had to be adapted, and the Sherman Brothers and Don DaGradai did an excellent job taking random stories and connecting them together.  For example, the presence of Mr. Banks is somewhat invisible in the book, and the choice to make him the antagonist helps string together a watchable movie.  Ironically, at the same time, I was reading this Between Book, I also started listening to the Sherman Brothers series on the Disney History Institute podcast which focused on the facts of Saving Mr. Banks and describes the actual adaption of the book into a movie.

In short, I was disappointed by Mary Poppins & Mary Poppins Comes Back.  I will not read any more of the series.  it is not for me.  But I also better understand the challenge that Walt Disney and his team faced when creating a classic movie.

This post contains affiliate links, which means that Between Disney receives a percentage of sales purchased through links on this site.
Posted by Between Disney at 10:32 AM No comments: