Between Books - Brittany Earns Her Ears 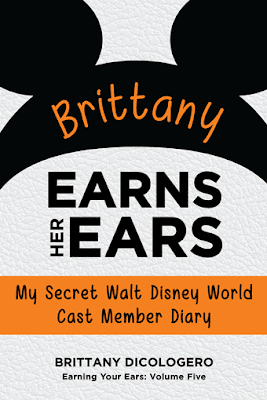 Brittany Earns Her Ears: My Secret Walt Disney World Cast Member Diary by Brittany DiCologero is the fifth installment in the "Earning Your Ears" series.  DiCologero follows the basic outline of these journals.  The author discusses why she chose to enter the Disney College Program, the application process, Disney College Program life, and her job as a merchandise cast member in Fall 2014.  She concludes the volume with reflection of her time in the program.

Again, this volume follows the basic outline of "Earning Your Ears" books.  And this allows a reader to come to understand this specific cast members decision about entering the program and navigating the process.  In this case, I found myself "routing" for Brittany since we are both history majors.  And I believe that if I was a young adult I would likely gravitate towards this volume thanks to our shared academic interests.  I can also see myself gravitating towards this volume since Brittany discusses maintaining and supporting a long distance relationship which would have been close to my own situation at that age.  I can see the value to readers of these types of books if one feels the author is like me.

DiCologero along with the typical topics calls out advantages to program participation.  This includes Disney discounts, typically deeper discounts than found at retail jobs.  Also she participated in educational experiences, giving this history major the most interesting business course she ever completed.  And of course, she calls out the fundamental truth...Animal Kingdom is hot!

Brittany Earns Her Ears is another well-written contribution to understanding and preparing for the Disney College Program.  Like all of these volumes, some will resonate better to others with readers due to experiences and common personality traits.  The series is one that should be examined by all potential College Program participants.

Posted by Between Disney at 8:54 AM No comments:

Between Books - Drinking at Disney 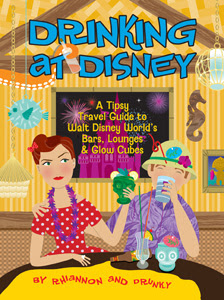 As I drink Cherry Pepsi from my Tervis cup and write this review, it seems so empty.  It feels as if my Texas Flag decorated Tervis given to me after being found in a supply closest should hold something with more octane.  And perhaps me and that the cup should be staring longingly at a forbidden bay as I seek a way to convince a cast member to give me and my Tervis entry!

Drinking at Disney: A Tipsy Travel Guide to Walt Disney World’s Bars, Lounges & Glow Cubes by Rhiannon and Drunky provides what is advertised, a description and rating of every bar and cart serving booze in Walt Disney World.  Drunky uses his vast research and knowledge of Disney drinking to provide his readers a location by location summary of drinking on property.  This includes his own creative maps of where to find one’s desired adult drink.  For each bar, lounge, and drink cart Drunky gives information about the menu, a rating of value, location, theme, vibe, and evaluation of the location. Ratings are delivered in terms of how many Tervis tumblers the bar earned, Drunky’s to go cup of choice.  Often Drunky gets things slightly askew ,or just plain wrong, so his editor Rhiannon jumps in to point out his errors on theming, his need to give additional love to pool bars (why) and pointing out drinks that do not end with Lite.  The pages are all vibrantly colored and illustrated making reviews fun, especially since the give and take between Drunky and Rhiannon is amusing.  Though I will admit I jump quickly between whose side I am on.   After the reviews the authors provides more value with pub crawls, strategies for drinking around the world (which are actually good safety thoughts) and lists of some of the best and worst bars in Walt Disney World.

I loved Drinking at Disney.  The read was really fun and the bickering between the author and editor is a great mix of dirty jokes and friend humor that made me feel like I was sitting on a bar stool.  And I think for someone who lives in Betweenland it had a twofold effect.  First, I found myself longing for a new Disney experience type.  Yes, I think in my previous visits to Walt Disney World I have not taken adult beverages enough into account, okay I am pretty much about the Between Kids on my trips.  But it is possible to enjoy some of these experiences without becoming Drunky and still being a responsible parent.  Second, I wish I had this book before my last trip.  Then perhaps I would not have regretted my trip to the Brown Derby Lounge, though we were there for a food item.  I would also not be regretting not hitting up my local pool bar, an actual decent pool bar!  I can also think of non-Disney addicted friends who this book would be a good resource for as they plan out a less child focused trip than I typically plan out.  Yes, I probably would not have left the Between Kid to stake my claim to a stool at Muddy Waters.  But regrets do hurt.

Drinking at Disney: A Tipsy Travel Guide to Walt Disney World’s Bars, Lounges & Glow Cubes is an essential book we never knew we needed.  It is fun and informative.  While I would likely never put the large sized physical edition in a suitcase of backpack, I would study it carefully before future trips back to Walt Disney World.

Sorry Rhiannon, I love my craft beer.  But sometimes a Bud Lite and Merica does beat Abita!

Posted by Between Disney at 8:16 PM No comments: 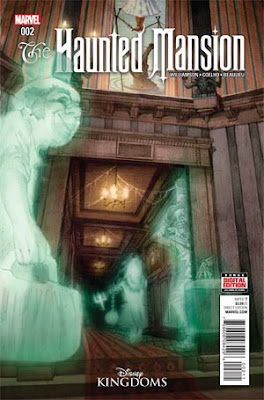 Danny charges into the castle to save his beloved grandfather’s soul.  Danny after entry meets Pickwick at the banquet hall the grand party that is taking place.  Pickwick loves this party and seems at times to forget the peril his soul is in.  And Danny appears to be picking up this attitude, making us worry if Danny will overlook his own quest.  Readers also meet the villains of the mansion.  The Captain, a soul trapped on land, appears to be the big bad that has trapped the souls within the mansion.  But it is Constance that even scares him and leaves the mansion’s denizens headless!  Is Danny now in the Captain’s sight?  Can he evade Constance?  And most of all, where’s Grandpa?

Joshua Williamson makes the story choice that Disney fans need him to.  He makes both the Captain and Constance, two villains filled with canon and head canon references, the villains of his tale.  In many ways he is reconciling the story needs of adult Haunted Mansion fans.  Someone would have been unhappy with either choice.  So he has gone with both.  And while neither side may be entirely happy, well the story is for kids and both villains seem to be serving story purposes.

The real highlight for me is the banquet.  Jorge Coehlo gets to draw a party, one which never ends.  His panels are full of the images that fans expect and require.  And Pickwick at the party is quickly becoming my favorite fun loving though misguided character.

Haunted Mansion #2 is a safe story giving readers what they expect if they are also Parks fans.  It has the payoffs you want.   It still also has the ability to touch the heart as I was deeply impacted by Grandpa’s reason for being in the mansion.  And needless to say I am still going forward!
Posted by Between Disney at 5:55 AM No comments: