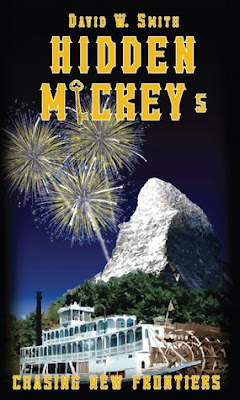 When I was a kid I read a lot of fiction. In the summer I may read a fiction book a day. But college beat it out of me. I read, read, read and so much of it was history and never ever fiction. I got into the habit of reading about one fiction book a year, if that. I have gotten into reading some fiction again in the last few years, but mostly comic books. And in the case of comic books I can rush through a story in 15 minutes to an hour. So I have just not felt qualified to review much fiction. In fact I have waived off possible review opportunities solely because I did not feel prepared. Then author and publisher David W. Smith pressed the issue, he sent me a copy of Hidden Mickey 5: Chasing New Frontiers, and being me I could not ignore the title.

Hidden Mickey 5: Chasing New Frontiers by David W. Smith is a tale that encompasses the entirety of Disneyland history. In the main storyline Disneyland cast member Blaine Walters meets and falls in love with guest Missy Johansen from Switzerland. Realizing that they are likely experiencing a brief fling the two spend as much time as possible enjoying each other’s company, Disneyland and the surrounding area. As they spend time together they uncover the mystery of stolen money and a pendent owned by Walt Disney, with potential paranormal powers stolen by a former Disneyland landscaper. And if there is not enough drama in this love story, Missy is actually a rising pop star hiding her true identity from Blaine. Will Blaine and Missy find the treasure hidden within Disneyland? Will the two young adults be able to continue their relationship beyond their short week together? Well, you will get no spoilers from me!

The first impression that popped out to me was that Blaine Walters is based on Smith himself. Blaine is a teacher, skilled tennis player, a cast member who works at the Davy Crockett Explorer canoes, and busies himself with a local band. Readers of In the Shadow of the Matterhorn will notice that this profile matches Smith’s own. Additionally, some of the fictional stories found in the book, like a romantic encounter with a security guard in the Haunted Mansion, match real life experiences that Smith had. In effect, Hidden Mickey 5: Chasing New Frontiers is a fictional account of Smith’s life with less canoe races and more pop star. This fact helps the story to ring true, as readers of his non-fiction book understand that Smith is writing from experience making his settings real Disneyland locations and the scenes largely ones that feel real.

The question that I had asked myself was could I read Hidden Mickey 5: Chasing New Frontiers without reading any other book in the series. The answer is absolutely yes. These earlier books, written by a combination of Smith and Nancy Temple Rodrigue, seem to be more supernatural in nature than this volume. Additionally they do not appear to have Blaine and Missy as main characters, from my searching on Amazon. The character that seems to overlap is Mani Wolford, the Wolf, a security officer that works in both our modern day and the early years of the park. The fact that Wolf has an air of mystery around him, and a clear understanding of magical things makes we want to know more about him.

I would describe the book as a romance first, with a mystery mixed in all set around Disneyland. Romance books are not my typical fare; I tend to read history or action (comics), so it was a little outside my wheelhouse. Yet, I was still able to find entertainment in the book. Of course the hook was the Disneyland setting, and the mixing in of Disney history. But the romance in the book still came off to me as interesting. If anything, though I would not trade my romance with the Between Wife away, I found a hankering to be alone with the Between Wife in Disneyland, silly kids! The romance itself is sweet and not overly sexualized, which was a breath of fresh air.

The book itself is big, like over 500 pages long. For some reason I found my reading pace to be slower than I typically do with non-fiction books. It took me over ten days to read it, mostly on a train. But I never set it aside for other books, and was ready to pick it back up whenever the opportunity arose. I am a man in my 30s, and it kept my attention.

The tale of Blaine and Missy is a sweet romance in a setting that I love. The mystery element and the setting will attract readers that typically would not flock to a romance novel. Despite the fact I question if a first timer would not be told to order the Monte Cristo at Club 33, I will admit it does seem a little heavy for Missy’s tastes. I could easily recommend Hidden Mickey 5: Chasing New Frontiers as a vacation book for those visiting a Disney park, looking for entertainment with some light tension with hooks that could pull in a variety of readers.

Review Copy Provided by Synergy Books Publishing
Posted by Between Disney at 5:37 AM No comments: 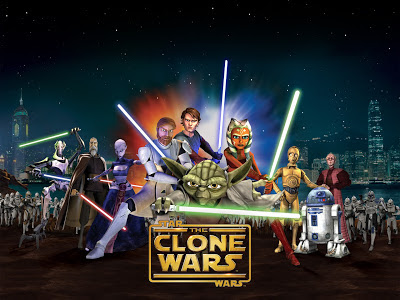 Star Wars had a huge impact on my childhood and Star Wars: The Clone Wars is becoming a part of the Between Kids’ memories. Before Disney announced the addition of LucasFilm, this animated cartoon was already a Mousey Movie, I mean television show. The cast is very familiar with Disney projects both in films and in the parks. And I continue to believe Star Wars is a great addition to the Disney catalog, because honestly Disney is very familiar with the franchise already!
Posted by Between Disney at 5:35 AM 2 comments:

Recently I joined my friend Matt Anderson, along with Koby Radcliffe, on The Sci-Fi Christian to interview Michael D. Sellers, the author of John Carter and the Gods of Hollywood.

Topics in this interview range from the history of John Carter, Disney Marketing, fandom and the future of the franchise.

I hope you enjoy this interview, I thought it was really fun.

Posted by Between Disney at 5:42 PM No comments:

Walt Disney’s Nine Old Men: The Flipbooks brings the skill of Walt Disney’s key animators to the reader’s hand. The title actually consists of 10 separate small books within a box. The smallest in size and the only soft cover, produced by animator Peter Doctor, provides background on each of these legends and provides a description of how films were animated during the era of the Nine Old Men. The essays describing each one of these legends are written by animation experts or friends of the animators such as John Canemaker, Don Hahn and Glen Keane. The remaining books are all hard covers and contain pencil drawings from the animators in a flipbook that the reader can animate by quickly turning the pages. The flipbooks cover the following:
This offering is part of the Walt Disney Animation Studios: The Archive Series.

The flipbooks are very handsome. And of course the art within the flipbooks are fantastic since they are portions of classic Disney animated scenes from the pencils of legends. And it is kind of fun to flip through the books, though I still do not have the fluid flipping I would prefer. But overall I would label Walt Disney’s Nine Old Men: The Flipbooks as fun.

But it is also somewhat pricey. The list price is $60, but Amazon has it for around $35. So as the Between Wife watched me flip the books she asked, how much did you pay for it? And I was somewhat bashful in stating the price, especially for just an hour of fun if I never pick it up again. So I would say this is probably a book not for everyone. Those who would want to purchase this are Between Books completionists and animation fans.

Walt Disney’s Nine Old Men: The Flipbooks is a fun interactive read. It will be most appreciated by animation fans and Disney book collectors. But for those with only a light interest, it is probably best to look elsewhere to build your Between Book library.


Posted by Between Disney at 5:43 AM No comments: