Between Books - In the Shadow of the Matterhorn 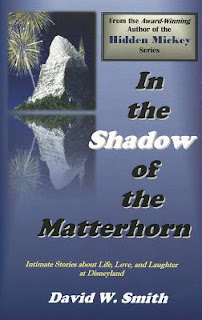 Before my last vacation to the Disneyland Resort I desperately was looking for a book to help put me into the vacation mindset. I wanted a memoir. But not any memoir, I sought a Disneyland memoir. I wanted it to be by someone who had an affiliation to the park, either as a designer or a cast member. And I wanted it to be fun, perhaps in the Mouse Tales tone. I found some books that I enjoyed for that vacation, but honestly nothing that hit the nail on the head for the exact book I was looking for. I should have looked harder. Because In the Shadow of the Matterhorn: Intimate Stories about Life, Love, and Laughter at Disneyland by David W. Smith was the exact book I was looking for!

Smith spent six years as a part-time cast member. He worked a number of attractions during his tenure including The Davy Crockett Explorer Canoes, the Mike Fink Keel Boats, Pirates of the Caribbean, and the Monorail. Smith details to his readers how he was hired on, the training he received and numerous stories of working the attractions. Smith recounts both the humorous experiences with guests, and the horrific ones. As one of a handful of Keel Boat operators he was asked to help search the Rivers of America during the June 4, 1983, Grad Night for a young man who had taken a joy ride with a Disney rubber raft. Sadly, Smith was on hand in the discovery of the body of 18 year old Philip Straughan. Along with tales of staffing attractions, Smith also provides tales of cast member life. These stories include romantic encounters and mostly harmless rebellious actions. But the highlight of these cast member tales are recounts of Smith’s years participating in the famed Disneyland cast member canoe races.

I found Smith’s reading light and easy to read. I cruised through this book and read it with only limited interruptions. To be blunt, I found no reason to end my literary Disneyland adventure in the middle of the Betweenland snows. Smith made it easy for me to join him in the park and share warmer ice free days. Additionally, he made we want to ride the canoes, a ride that I have always planned later in the day when I have found it closed. And he placed me with him on the keel boats and helped me understand this extinct attraction before my day. Smith also helped me understand why for some the Monorail may not be the attraction of choice! The only hiccup for me was referring to the Walt Disney World Resort as Disneyworld later in the book.

I found David W. Smith’s In the Shadow of the Matterhorn fun and enjoyable. Smith is a former cast member who enjoyed his days as a cast member and in his writing conveys his enthusiasm for his memories. Readers who enjoy the writings of David Koening will likely enjoy In the Shadow of the Matterhorn, which includes many of the types of stories one would find in Mouse Tales, just in this case shared by one man and typically not as risqué. I think the best compliment I can give is for a few hours, David W. Smith made me feel like I was at Disneyland and not living in the frozen tundra!


Review Copy Provided by Synergy-Books Publishing, U.S.A.
Posted by Between Disney at 5:32 AM