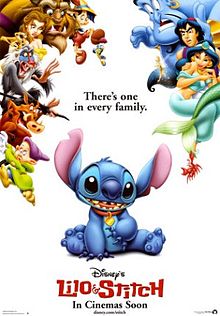 Love him or hate him you still have to admit that Stitch is part of the Mouse Family. The lovable/despicable alien’s merchandise is everywhere and sells! In the Between Family, Stitch is beloved. The Between Tween when younger got into fights with PhotoPass photographers looking to add magic to photos. They wanted a terrified reaction to match up with the inclusion of Stitch in the photos. Why would you act scared when your lovable friend Stitch emerges? That is absurd the young Between Tween would announce. Luckily in 2012 we found a photographer that understood the excitement and encouraged an over the top thrilled reaction. The Tween loves the photos of Stitch happily popping into frame.

In this Mousey feature, Lilo & Stitch, alien criminal Stitch flees to Earth. While trying to hide from his captors he meets and bonds with a young girl named Lilo. Lilo has recently lost her parents and her guardian and older sister struggles with growing up more quickly than one might want. Lilo adopts Stitch as her family pet, in a family where family matters.  this Alan Silverstri scored film is here to stay with all it's Mouseyness:

Ohana means family, a message that the Between Family reminds ourselves of a lot. The Between Tween also likes to remind me that meat on sticks is delicious! I like Lilo & Stitch in the final assessment, though honestly if the Between Kids are rewatching it I tend to look for something else to watch. But based on the number of times I have heard the opening theme when cruising the roads of Betweenland behind my head, Lilo & Stitch continues to be a kid hit.
Posted by Between Disney at 5:36 AM