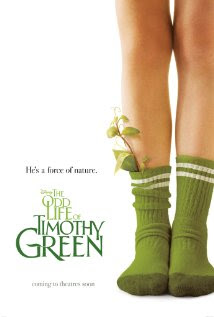 I really intended to see and review The Odd Life of Timothy Green. But the end of summer got really busy and I never saw the film. So the Between Wife and Tween went off alone to see it and both gave it ringing endorsements. So we bought the film and I recently watched it at home with seven loved ones. And I admit, I think that watching those that I care about enriched my viewing experience.

Cindy and Jim Green, played by Jennifer Garner and Joel Edgerton, after several attempts and growing debt discover they have no options for helping them have a child of their own. Faced with their certain infertility, they allow themselves one more night to dream of what their child would be like, placing the attributes of their unobtainable child in a box which they bury in their garden. After a freak rain storm, they discover a young boy in their home claiming to be their son Timothy, played by C.J. Adams. The Green’s struggle with becoming instant parents to a unique child, Timothy has leaves growing from his legs, and learn about love in this family focused story:

To be completely honest, I am not sure if The Odd Life of Timothy Green is a buyer. It has a slow pace and is far from an action adventure. No one dressed in black ever comes from a mysterious government agency to take Timothy away. At the same time it is a tearjerker in a good way. And it is a film you can watch with the family especially if you have mature children that are able to understand complex issues. I admit I did not expect a “Walt Disney” production to make me reflect on my parenting choices in the depth that The Odd Life of Timothy Green led me to. I would recommend parents and future parents spend two hours with the Greens, but action fans will likely quickly loss interest.
Posted by Between Disney at 5:36 AM