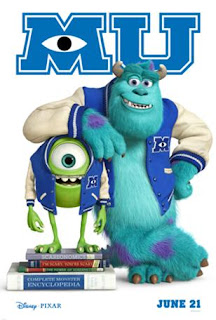 Over my holiday break I was refreshed and spent a ton of time with the Between Family. One of our outings was to take in Monsters, Inc. in 3D. Honestly we do not take in every Disney 3D release but we really enjoyed seeing this offering again on the big screen and in the 3D format. We hoped, and were right, that the door room scenes would shine.

Part of the enjoyment was seeing three new to us trailers. Some of them had been released earlier.

The first was more of a university advertisement than a trailer, for Monsters University. Oh yes, who doesn’t love good old MU?


This quick commercial made me more excited for this summer release, but it also really made me hope they open up the Monster’s University website up soon for student registrations. The fact that I was wearing my MU baseball cap I got for Christmas helped reinforce my desire for Monster’s University to become more interactive.

The second was a new trailer for The Lone Ranger.

The reaction was a mixed bag in the Between Family. I am convinced that I have a 50/50 chance of seeing it in the theater, but the Between Wife has no interest in this film. We do not watch a lot of Westerns so the only hooks for us are the Disney label and Johnny Depp.


The third was a new trailer for Oz The Great and Powerful.


Honestly, I have mixed feelings about John Franco and his roles. But I believe this trailer only confirmed that we will see this feature in the theater as a family. It really does look beautiful and the visual design alone grabs the viewer’s attention.

Which of these future Mousey Movies are you excited about?
Posted by Between Disney at 5:27 AM