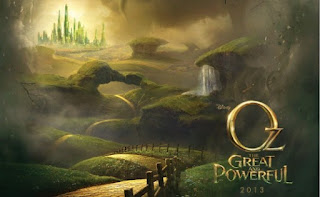 Disney at the 2012 San Diego Comic-Con has released the first Trailer for Oz The Great and Powerful.


What do you think?  Does Disney have another franchise smash in the mold of Pirates?

Personally, I have been somewhat apprehensive.  I really enjoyed Sam Raimi's Spider-Man, but had lost excitement by the third installment in the franchise.  And James Franco has not been a favorite for me, but then I have not disliked him either.  It has a real Alice in Wonderland feel to me in some scenes, with a pinch of John Carter.
Posted by Between Disney at 5:28 AM