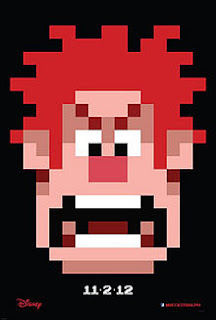 If there is one trailer that the Between Kids cannot stop watching it is Wreck-It Ralph.  The trailer shows a very Disney like storyline, the discovery of self, in a very un-princess world.

Ralph may be a bad guy, as they say, but he does not appear to be a bad guy!  The Between Kids take notice every time this trailer pops up and was their favorite of the pre-Brave trailers.  So the enthusiasm is there with key audience demographics.  And they love seeing images of characters from worlds like Super-Mario and gobble up news about appearances by characters like Sonic the Hedgehog.  For me I am looking forward to finding out how Disney will handle a large number of non-Disney characters.
So enthusiasm is high, but that momentum can be lost!  I was more excited for Brave a year before I saw the movie than I was the day I saw it.  I do not know if it was the marketing campaign, my own desire to stay away from spoilers or John Carter fatigue (I have spent so much time defending it), but I was finding myself unexcited about Brave as I entered the theater.
Maybe Disney has become wise to the fact they need to keep those likely to see their films excited about them in the long months before the release and are looking to new ways to keep that enthusiasm stoked.  One way they are attempting to keep us excited for Wreck-It Ralph is a new app for iOS devices like iPods and iPads called Fix-It Felix Jr. which ties directly into the November movie putting the characters of Ralph and Felix directly into the hands of the future audience.
The game itself uses images we see in the trailer.  Ralph climbs to the top of the screen which has a background that appears to be an apartment building.  He then begins to wreck the building by dropping bricks.  You control Fix-It Felix Jr. as he scurries around the screen fixing the broken windows, doors and shutters on the building.  After everything is fixed Ralph climbs higher and you begin again.  There are obstacles to slow Felix such as ducks, the falling bricks and partitions which limit Felix’s movement.  These obstacles are added as levels increase. Additionally players can pick-up items like additional life or time.
﻿
﻿

First, I really like the idea of marketing the movie by offering a game, and a free game at that.  I think the idea is brilliant.  Second, when I initially played I enjoyed the game and made it to level 4 after a few plays.  Third, the Between Tween really enjoyed playing and wanted to beat my high score.  Finally it really does have the 8 bit feel of Donkey Kong or Mousetrap from my childhood and I love the trip back into memory lane.
But with all that said I do question the replay value, as it seems to repeat the same goal over and over again.  Fix-It Felix Jr. is no Where’s My Water ? with its growing number of levels and variety.  And I never saw from the trailer the residents of the building throwing Ralph over.  I’m sorry Wreck-It Ralph but I really wanted to see you thrown off the roof.
If you want a piece of Wreck-It Ralph now, Fix-It Felix Jr. may satisfy your craving temporarily.  The game may not hold you until November, but with a cost of free you can’t go wrong enjoying at the least a few game play sessions.
Posted by Between Disney at 5:33 AM