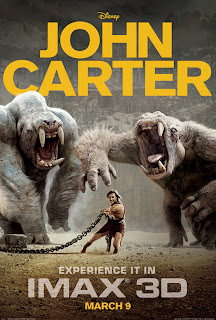 I have been really critical of Disney and science fiction offerings in the past.  So I have been watching reports and rumors for John Carter with both hope and fear.  I have said several times that Andrew Stanton’s involvement convinced me that the film would be solid.  And I read the original John Carter book Princess of Mars and loved it.  I could see how it would be the great foundation of a movie.  But reports that are predicting that John Carter will be a flop have worried me.  And I have had my own fears because the initial trailers did not do justice to the movie I hoped for.  I was finally able to form my own opinion of John Carter at the D23 nationwide previews held before the movie release.
The bare basics of the story are that John Carter is a Civil War veteran and cavalry officer attempting to find his fortune and maybe himself in the western frontier.  In the search for his cave of gold he is transported to Mars, or Barsoom.  On Barsoom he finds himself meeting new peoples and cultures such as the Tharks, a green Martian race, and getting caught up in a struggle for control of Barsoom.  Once it is discovered that Carter has super strength and jumping ability due to his Earthly birth, he is urged to enter this struggle by Princess Dejah Thoris, who of course serves as a love interest.  Here are my initial thoughts on John Carter:
·        Beauty:  This film is wonderfully framed with vast and intriguing landscapes.  Mars may not be red, but it is a desert world with sweeping views and interesting geological features.  Let’s be honest this is kind of a weird place to start, but those of us raised on Star Wars learned to look to the background because it sets the mood of the movie.  I honestly believed that the story was occurring in an interesting and alien world, not on a Utah set.  Because of these great shots I would skip the 3D personally. I find 3D to be distracting at time, maybe the technology is just not there yet.  And it gave depth to the scenery, but I also felt like the glasses, weird flickers, and the dimness that comes with the glasses at times kept me from fully entering the frame.

·        Story Changes:  The source material Edgar Rice Borroughs' Princess of Mars is a century old and never envisioned as a movie.  And having read the book and seeing the trailer I could not always determine how they paralleled.  For example I knew that the Therns a villain group from the second John Carter book The Gods of Mars were added to the movie.  So I was a little confused if the movie adapted one or two books.  First, I now understand why the Therns were added, as the seemed to lack connective material and seemed like thinly connected adventures to me.  The Therns now provide the story a consistent villain.  Second, I still found the movie to honor the original Princess of Mars very well.  Scenes are repurposed.  So Dejah, John and the Thark Sola still take a river voyage but now it is for a different purpose.  And key elements are retained though abbreviated for the delivery of a movie.  So the movie still explains the relationship between Sola and Thark Jeddak, chief, Tars Tarkas, but it is explained in seconds not a chapter.

·        Tars Tarkas:  If John Carter had one character that I would have critical expectations of it is Thark Jeddak Tars Tarkas.  Tars Tarkas needed to be big, green, fierce, compassionate, loyal and loving all at the same time.  Visually, I was impressed with the green Martian.  Story wise, Tars Tarkas delivered for me. And actor William Defoe delivers in voicing the Jeddak, giving him wisdom, maybe Martian Yoda, mixed with experience.  If I was going to be lost with a character it was Tarkas and I was pleased.

·        Is Something Weird Here:  Many of the scenes in this movie include live action and computer generated animated characters in the same frame.  Most of the time this works very successfully.  There is only one scene I can remember where I felt like I could tell that there was a mix of real and animated actors.  But for me most scenes are like the scenes with John, Dejah and Sola canoeing down the river, nothing strange here.  Humans interact with green Martians all the time!  It all seems to blend.

·        Woola: Woola is a hairless Martian dog, one who loves John Carter.  Now in line I had a conversation with another dad a few years older than me.  The discussion started with Star Wars, led to Jar Jar Binks and climaxed with his hatred of Ewoks.  Now I live on the other side of the Ewok Line as described on How I Met Your Mother.  I’m very okay with Ewoks.  The key is the Ewoks were written to satisfy my young self, where older viewers just found them campy.  Woola is the Ewoks of John Carter.  Older viewers are going to question Woola’s extraordinary abilities, but the Between Kid with me loved it.  Woola is going to make the kids happy.  Now if the movie wasn’t rated PG-13!
﻿﻿

·        Of Mars?:  When I originally read Princess of Mars, John Carter did not always resonate with me.  Sometimes he seemed unfamiliar.  He was a veteran of the civil war, he had extraordinary abilities on Mars, and sometimes he did not seem nice.  He did not connect with me in the same way as a character like farm boy Luke Skywalker.  Originally the title of this film was John Carter of Mars.  There has been a lot of debate about why they shortened the title artistically and marketing wise.  Now I understand more, John Carter really is John Carter of Earth for most of this film.  They have added to the story to ground him on earth, give him a back story that I can better relate to and in many ways I am more sympathetic to the character in the movie than in the book.  In short, John Carter the man is better fleshed out in the movie and I understand him better now thanks to a few screenwriting additions.

·        Sequel: I want a sequel.  I have seen interviews with Stanton where he points out the movie can stand alone, though he would like a trilogy to be completed.  Yes John Carter could stand alone.  But they have left it open for a second offering.  And knowing the content of the Gods of Mars which they would work from for a sequel they have done an excellent job preparing us for a follow-up.  I’m crossing my fingers this is not a Disney financial write off and hoping for a box office that forces Disney to make a sequel.
I have not been a fan of Disney sci-fi.  Everyone debates how to fix Tomorrowland.  Tron is a cult classic.  And that is not even addressing animated films like Mars Needs Moms and the critical reaction.  But I won’t complain about John Carter.  Instead I am excited for more adventures on Barsoom.  And I hope enough of us vote by visiting the theater to give Stanton the green light to jump into the next production.
Posted by Between Disney at 5:34 AM