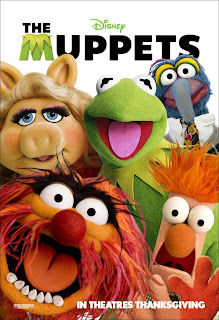 The Muppets are back and here to stay for awhile.  At the March 13, 2012, annual meeting, Walt Disney President Bob Iger stated that a sequel is in the works for The Muppets.  Clearly the House of Mouse is happy with the performance of this Mousey Movie.
When I first watched The Muppets in the theater I immediately declared it a Mousey Movie.  It is just so so rich when you are seeking Disney references.  With the release of the movie on DVD and Blu-ray I realized that I missed tons of Mousey reverences and that I needed to correct my oversights from my original viewing.

·    The Disneyland Band:  What is a Muppet production without a big musical number?  “Life’s a Happy Song” at the beginning of the movie really sets the story, letting us know how great things are in Smalltown and the positive attitudes our main characters Walter, Gary and Mary have towards life.  Of course if you have a big musical number you need a band!  A marching band dances and plays behind the citizens of Smalltown as our happy trio lead the community in song.  The marching band is made up of members of the Disneyland Band.  Okay, I can’t take credit for finding this one, because to me all marching bands pretty much look alike.  The credit for this find goes to the official DisneyParks Blog.

·    Theme Park Problems:  Walter has a problem as he plans his visit to the home of his heroes, The Muppet Studio.  What to do first?  Which attraction will have the shortest lines and the longest lines?  Walter needs to maximize his touring day!  Every parks addict knows what Walter needs is a Touring Plan!

·    Kermit’s Wall of Stars: At the Muppets Studio one could visit Kermit’s Office, it used to be the highlight of the tour I hear.  On Kermit’s wall are several portraits of Kermit with celebrities and former guest hosts for the The Muppet Show.  One may find a former English nanny and sometimes Queen of a small European nation on the wall.  You can also see pictures of Kermit with Steve Martin, a former Disneyland cast member who credits the late Disney Legend Wally Boag for inspiring much of his early comedy.  But for me the picture that jumps out is one of Kermit with his creator Jim Henson.  This may be cheating to call a tribute to the creator of the Muppets as Mousey, but in 2011 the late Jim Henson was named a Disney Legend securing his place within the legacy of the House of Mouse.

·    Toy Dinosaurs:  Music supervisor Bret McKenzie was familiar with actress Kristen Schaal as both worked on the show Flight of the Conchords, but so are Disney fans.  Schaal’s anger management instructors share a voice with all Disney fans second favorite dinosaur, first with web surfing skills, Trixie from Toy Story 3.

·    Hidden Mickey: As everything great and wonderful should start with a larger than life musical number, we all know from spending time in the parks that the night should end with fireworks.  Towards the end of The Muppets we get those fireworks.  For those who want to see it, three firework explosions create a classic hidden Mickey.

·    The Lost Scenes:  The special features of the Blu-Ray disc contains tons of Mousey Moments.  I direct your attention to the Deleted Scenes!  One scene includes an alternative arrival for Walter, Gary and Mary in Los Angeles.  In this version the Greyhound bus delivers them directly to the front of Grauman’s Chinese Theatre, a duplicate of which can be found in Disney’s Hollywood Studios containing The Great Movie Ride.  Television executive Veronica shows the Muppets a number of popular shows on her network.  This includes Credit Card Club which stars Modern Family’s Sarah Hyland and So Random’s Sterling Knight.  And another deleted scene shows the Muppets staging a fake Academy Awards presentation to find a host for their telethon.  The event is broken up by frequent Academy Awards host Billy Crystal, who notes some of the Oscar statues are made of chocolate.  Everyone loves Crystal as the voice of Mike in Monsters, Inc. and the future Monsters University.
The Muppets is such a rich movie when it comes to gags, puns and pop culture references.  I am sure I will see even more in my next viewing, and the one after that.  It already has a place of honor in the Between Household as the Between Kids are addicted to “Man or Muppet.”  The Muppets make everyday in Between Land a day where “Everything is great everything is grand”

This post is part of the Disney Blog Carnival. Head over there to see more great Disney-related posts and articles."
Posted by Between Disney at 5:32 AM