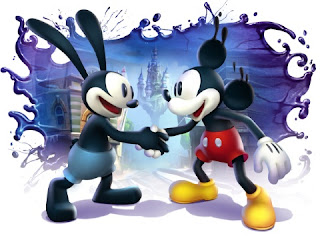 Earlier this week Epic Mickey 2: The Power of Two was announced for an October release date.  Here is the game trailer:


What are your thoughts?

I got the original as a gift two Christmas' ago complete with the paintbrush nunchuk.  I enjoy the original and my kids love watching the gameplay, but I seem to lack the time to commit to finishing it.  I would rather play multiplayer games that the Between Kids can enjoy too.   Epic Mickey is the platform that introduced the Between Kids to Oswald.  But the game play itself is above the youngest abilities.  So Kinect Disneyland Adventures has become our default game.

But I am excited to see that unlike Epic Mickey the sequel will be released on multiple platforms, and not just the Wii.  And the first question that I got from the kids was, can we play Oswald?  And the answer is yes, yes you can.  And the sequel has allows for two players, the brothers of Mickey and Oswald together for the first time.

Are you excited for this next adventure in the Wasteland?
Posted by Between Disney at 12:02 PM