Between Books - Disney World at 50 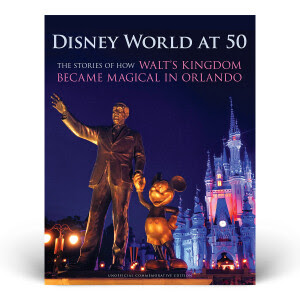 The Orlando Sentinel’s Disney World at 50: The Stories of How Walt’s Kingdom Became Magical in Orlando collects portions of the Orland Sentinel’s fifty years of reporting on the Florida vacation kingdom.   The book collects portions of articles printed in the Orlando Sentinel with tons of images from Walt Disney World.  The book covers the history of the park chronologically from the announcement for the park to the park today.  Topics covered include building the Magic Kingdom, opening day, transportation, changes in the park, and 2021 events.

The text is a pretty interesting read.  The audience gets to read historical news articles with the knowledge of today to better understand intentions and things that did not occur.  The images are very enjoyable, and coming from the newspaper's archive and not Disney’s photo collection provides many new to me images.  I do find that the page numbers are at times lost in images.  Additionally, there is a gap in the narrative.  The book jumps 24 years to the current day and the impact of the Coronavirus on the parks.  And the several pages of content do feel out of balance with other topics in the book.  Honestly, I would have found it more balanced if an event like September 11th and that park closure was included due to the impact on American society.

The Orlando Sentinel’s Disney World at 50: The Stories of How Walt’s Kingdom Became Magical in Orlando is an interesting visual adventure.  It allows us to look back with what we know today and revisit the past.  And with images that we typically do not see in other books, readers can enjoy the 50th anniversary regardless of where we are between the parks.

Posted by Between Disney at 12:42 PM No comments:

Claude Coats: Walt Disney’s Imagineer-The Making of Disneyland From Toad Hall to the Haunted Mansion and Beyond by David Bossert is an excellent addition to the history of Disney Imagineering.  The text balances images with narratives and gives this legendary Imagineer the chronicle he deserves.

The text offers exactly as titled.  Bossert works through Coats’ career from birth to the completion of one of his most famous projects, The Haunted Mansion.  The book outlines his early career from art student to animation.  Bossert follows with discussions of his transitioning to work on Disneyland, moving beyond design to actually painting backgrounds to get the work done.  The discussion of the Grand Canyon Diorama is one of the most in-depth that I have seen.  Chapters provide details on his collaborations for the fan-beloved Pirates of the Caribbean and The Haunted Mansion.  But along the journey, the book includes interludes on presentations to NASA and painting for the U.S. Air Force.  The text is well-balanced with Coats’ images and text providing historical context to Coats’ work.

The text is really well done overall.  Bossert helps us understand Coats as an artist as he was someone who unlike Marc Davis did not work alone in his office.  But instead would often work outside working on models and collaborating with other artists.  Bossert frames Coats, not as someone who would be adversarial with other artists.  But instead, someone who was a team player, mentor, and project management.  Additionally, the chapter on the Air Force paintings demonstrated Coats as an artist outside of his Disney work and makes it clear that he truly was a respected Califroonaia fine artist.  The biggest gap I see in the books is a lack of discussion after the Haunted Mansion.  It would be interesting to be able to compare the frustrated Marc Davis after the Mansion with Coats and how he navigated being creative as the next generation grew into their own.

Claude Coats: Walt Disney’s Imagineer-The Making of Disneyland From Toad Hall to the Haunted Mansion and Beyond by David Bossert is a great inclusion to the Between Books bookshelf.  It is well written and illustrated.  And it clearly left me wanting more.  Maybe we needed a two-volume set here!

This post contains affiliate links, which means that Between Disney receives a percentage of sales purchased through links on this site.
Posted by Between Disney at 12:02 PM No comments: