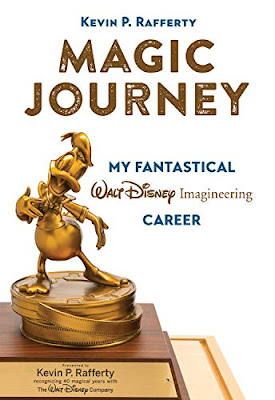 Magic Journey: My Fantastical Walt Disney Imagineering Career by Kevin P. Rafferty details a Disney story of a young man who turned his back on a life in ministry and a possible animation career to become a key story writer for Walt Disney Imagineering for decades.  Rafferty's story begins with a young man who planned to become a priest.  However, his theological studies were diverted by his love of art.  Planning to become an animator, Rafferty went to art school and started a job at Disneyland.  Thoughts of Disney magic were quickly destroyed as he started his job in the dish room.  However, he persisted, showed himself to be a hard worker and was offered promotions in Food and Beverage that eventually saw him on the floor of Club 33.  With the development of Epcot, WED the future Walt Disney Imagineering began to aggressively recruit new employees which opened the door to Rafferty's entry level, and we mean entry, job at WED.  Again, Rafferty's hard work and a brief stint in marketing allowed him to move past the open door to a long-term and prolific Imagineering career.  Rafferty's numerous projects ranged from the Pan Galactic Pizza Port at Tokoyo Disneyland, the Hollywood Tower of Terror, the Finding Nemo Submarine Voyage, Test Track, Carsland, and many many more.

Overall, I really liked Magic Journey.  Rafferty has a calm and easy to approach tone where you feel like you hear his voice and his personality.  And of Imagineers of the second generation, Rafferty comes off as the most approachable.  Additionally as someone who worked on countless projects, there is something for everyone's different Disney niches.  Rafferty also gives his readers a view of some of the non-exciting non-artistic jobs within Imagineering, ones that may not have the spotlight but are important to Imagineering's operations.  Readers also got to see Marty Sklar in a new light, as the humorous boss who often joked back and forth with Rafferty though notes and pictures.  The book is dense with every page packed with words... but Rafferty also provides numerous pictures and images to help support the reader's imagination.

Kevin Rafferty came into Imagineering at the lowest level possible.  Decades later he left as an important story writer and second generation Imagineer.  His memoir Magic Journey provides readers a detailed record of his Walt Disney Imagineering career and the projects that he worked on.  The text is sure to delight Disney parks fans as he details his work internationally with his own inside look at dining, attractions and even entire lands.

Posted by Between Disney at 8:15 PM No comments:

Between Books - Tales from the Haunted Mansion: Volume I The Fearsome Foursome 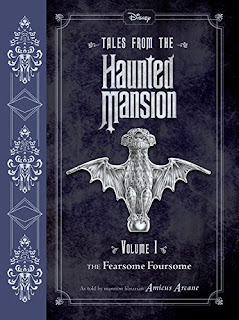 Tales from the Haunted Mansion: Volume I The Fearsome Foursome by Amicus Arcane sets Goosebumps style stories near Disney's Haunted Mansion.  The volume contains four scary (or five) stories based around the Fearsome Foursome, a group of four fictional tweens who love horror stories.  The tales range from the tale of a cursed baseball glove, a dare gone wrong, a sea monster in the background and the return of pets past.  All of these stories are told by Amicus Arcane to the youngsters using his volumes in the library of the Haunted Mansion after they stumbled into the happy haunt.  He promises he can beat the four at their own game in telling scary tales.

I picked up this volume and expected that the stories would be tales of familiar residents in the Haunted Mansion.  Alas, the stories are all actually about the foursome and not the hatbox ghost, Leota or even the mummies.  And for me this is likely what I found a bit lacking, along with not being a tween reader or someone who enjoyed Goosebumps as a kid.  In the end, author John Esposito provides Arcane his stories and illustrator Kelley Jones embellishes these tales with the occasional image that provides closing thoughts on chapters bringing the story out of solely the imagination.  And I assume for a tween who like Disney and scary tales this book is likely going to provide them wall to wall creeps.

Tales from the Haunted Mansion: Volume I The Fearsome Foursome by Amicus Arcane is not what I expected.  It hints at the Haunted Mansion and occasionally provides the needed reference.  While it may not be a volume that adult readers will enjoy, tween horror readers will likely find it fun as they follow tweens that have the same issues as themselves and their friends.

Posted by Between Disney at 8:27 PM No comments: