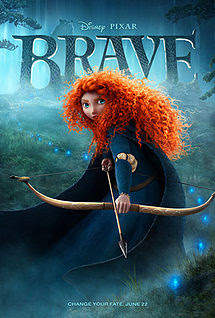 I admit it, I doubted.  I thought that families would flock to the opening of Disney Pixar’s Brave, but I still did not think that it would beat out the patriotic vampire slaying crowd.  Could I have been more wrong?  Yeah, 13 consecutive number one openings for Pixar!  And domestically and internationally Brave earned $80 million in box office.  Meanwhile Vampire Moments with Mr. Lincoln crawled to $16.5 million, coming in behind two family films.  Pixar, why do I doubt?

The movie itself is solid overall.  The story of Princess Merida and her search to keep her freedom will score high with the family crowd with its message of unifying family strife.  Personally, I enjoyed Brave, but I have to admit it did not crack my Pixar top five.  Of course that is a pretty big chore with Up, Monsters, Inc., and the Toy Story trilogy being pretty tough to unseat.  Visually the movie is impressive, but at this point we come to expect that from a Pixar production.  The Between Kids were divided.  The youngest did not see talking toys or cars and was pretty meh in reaction.  Maybe the movie was too real for his tastes.  The older Between Kid loved it.   But the older kiddo has more refined tastes.  Here are my overall hopefully non-spoiler thoughts on the Mousey Brave.

·    The Captain’s Seat:  Mark Andrews is the director who completed Brave.  For many Andrews may seem like an unknown but his Pixar resume is impressive.  He directed the highly enjoyable short “One Many Band”, was head of story for The Incredibles, story supervisor for Ratatouille, did some storyboarding for Cars and contributed (cough cough) to Pixar’s live action adventure John Carter earning screenplay and second unit director credits.  Andrews may be the next up and coming Pixar director and I am sure that executive producers John Lasseter, Peter Doctor, and Andrew Stanton felt very comfortable with him in the director’s chair.  And I think it’s a bet that paid off.

·    The Princess: Pixar has officially added their princess to the Disney Princess Pantheon.  And her strong willed attitude will probably help her fit in with Belle and Rapunzel.  But they may be shocked to find out that for Merida her solution to life’s problems is not something that can be solved with marriage, but something she is willing to fight for herself.

·     Skin Flick:  There is a ton of nakedness in Brave.  Okay, two scenes with a third hinting at it.  Luckily it is all good-natured innocent man flesh.  But I can remember when the debate around Beauty and the Beast was there too much cleavage!  I would say Pixar has jumped ahead of that debate.

·    The King: Billy Connolly voices Merida’s father King Fergus.  Connolly is perfect as this Scottish monarch and sometimes I forgot that the animated figure is not Connolly’s real image.  Connolly is not new to Disney animation having narrated the 2011 short “The Ballad of Nessie.”

·     Clear Cool Water:  Pixar is really amazing.  For Finding Nemo they had to learn how to animate water and lots of it.  They did so good that they had to actually cartoon the water up so the audience would not believe it was real.  The water in Brave is so brilliant and realistic I was struck by it.  I felt like I could reach out, fill up a glass and have myself a cool refreshing drink.  Both Brave and Brother Bear have scenes in which a bear or bears fish in a river.  They cannot even be compared because the style in Brave could easily be part of our world.  Okay, I am weird and have heard others mock me when telling them this impression, so you may be ignoring the water in your viewing.

·    Wooden Toys: In the witch’s shack you have to watch carefully because not every item is a bear amongst her wares.  Pixar fans will be pleased with one of the other items in her collection.  Likewise, listen carefully when the clan leaders arrive at King Fergus’ castle.  Though I did not catch an A113, Pixar has made at least two streaks extend to 13!  (If you found a A113, let us know in the comments.)

·     Magic: Merida wants to change her fate and the mind of her mother.  To do this she turns to magic.  Like my current favorite ABC show Once Upon a Time we get an important theme about magic, it comes with a price.  When Merida talks to the witch about the spell, the witch’s responses give hints that there are no shortcuts without penalty a fact all of us have learned faithfully on Sunday evenings.

Betweenlanders will surely be supporting Brave in the coming months.  Though, it has not broken into my Pixar top five, I am sure that it will be seen several times in the Between Family over the next few years on home video.  And I am sure if given the chance the Between Kid would love to meet Merida alongside her fellow Disney princesses.  But it does not come close to unseating Up in my heart.  But I hear plenty of love for Brave from the Disney community.

Congratulations Pixar, you have a cowboy, an astronaut and now a princess.


This post is part of the Disney Blog Carnival. Head over there to see more great Disney-related posts and articles.
Posted by Between Disney at 5:30 AM

Email ThisBlogThis!Share to TwitterShare to FacebookShare to Pinterest
Labels: Billy Connolly, Brave, Mousey Movies Review, Once Upon a Time, Pixar, The Ballad of Nessie