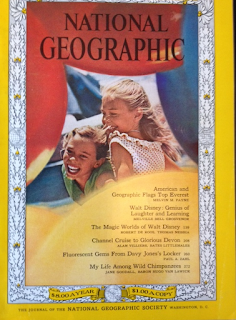 Recently the Between Wife found some fantastic vintage Disney photos on Pinterest.  Clicking into them led to two blog posts at Imagineering Disney which highlighted pictures from the August 1963, issue of National Geographic exploring the life and creations of Walt Disney including Disneyland.  The Between Wife immediately ordered me a copy of this magazine giving a window into 1963 Disney culture.
The magazine itself has three significant peeks inside Walt Disney’s world.  The first is a brief article titled “Walt Disney: Genius of Laughter and Learning” by Melville Bell Grosvenor which speculates on the future legacy of Walt Disney.  The second article by Robert De Roos is a large and richly illustrated article titled “The Magic Worlds of Walt Disney” which outlines the animated, live-action and theme park endeavors of Walt Disney.  Finally, as part of this second article is a multi-page aside titled “Animation: Mickey Mouse explains the art to Mr. G.O. Graphic” using images of Mickey, Goofy, Donald and their friends to explain how Disney creates animated stories.

“Walt Disney: Genius of Laughter and Learning” is the real centerpiece to the Disney offerings in this magazine.  De Roos profiles Walt Disney’s rise to success from a humble childhood.  He quotes Walt Disney’s older brother Roy O. Disney, “As long as I can remember, Walt has been working (De Roos, 167).”  A picture is painted of a hard working man who has his hands in a number of endeavors simultaneously.  Walt Disney when asked what he actually does comments that he is an executive producer, “sometimes I think of myself as a busy little bee.  I go from one area of the studio to another and gather pollen and sort of stimulate everyone (De Roos, 162).”  And stimulate he does as De Roos explores Disney’s vast projects.
This is National Geographic so one aspect of Disney’s films resonates with this audience, live action nature films.  Nearly nine pages go into depth on the production of the Disney True-Life Adventure series.  Ironically, many of these pages are illustrated with pictures taken from Disneyland not with animals but happy park guests!  The author discusses how these nature films are produced, including sharing a story or two of the crew interfering with the natural consequences of animals in nature.  Overall, the article provides a nice summary of the True-Life Adventure films and their production, including how Disney crafted a story from film taken in the field.

For me it was information about the parks that I found the most interesting.  A pullout map makes mention of a Haunted Mansion, a building on the map but not yet an attraction for years to come.  Walt Disney shows the author plans for the 1964 World’s Fair showing Ford’s Magic Skyway.  The piece I found the most interesting was Disney’s demonstration of an Abraham Lincoln Audio-Animatronic figure slated to be part of a Hall of Presidents inside a new Disneyland attraction One Nation Under God.  Instead as we know that figure became part of the state of Illinois’ World’s Fair attraction, Great Moments with Mr. Lincoln.  It is exciting to see early WED the original Imagineering workshop, in action.


It’s not just the articles that give us a window to Disneyland of 1963, it’s also the advertisements.  An ad for Insurance Company of North America features the E.P. Ripley of the Disneyland Railroad.  Another for United Airlines shows how one can travel from Los Angeles to Disneyland by helicopter!  Though unintended, these advertisements give us a glimpse into Walt Disney’s Disneyland.

And there is foreshadowing in this issue about what was to come much later.  One article “Fluorescent Gems from Davy Jones’ Locker” hints at a future villain in the Pirates of the Caribbean film franchise and Disney attraction.  Though the reference is ironic, the real foreshadowing comes in the article, “My Life Among Wild Chimpanzees” by Jane Goodall.  The article makes many references and provides photos of a Chimpanzee that she named David Graybeard.  As a tribute to Goodall and her conservation work, David Graybeard was sculpted into the Tree of Life at Disney’s Animal Kingdom three decades later!  Yet another reference is made to a future Disney’s Animal Kingdom attraction in the article “American and Geographic Flags top Everest” foreshadowing the Expedition Everest roller coaster.
In August 1963, National Geographic had a lot to see and read for Disney enthusiasts.  The pictures themselves without commentary are nothing short of classic.  The articles showing how WED and Walt Disney worked are a glimpse into a time gone by.  Volume 124, No. 2 provides us a window into Walt’s world the way it was, the way it would be, and the way it never was.
Posted by Between Disney at 5:25 AM