Between Books - Design: Just For Fun

Memories change, fade and play tricks on us.
And sadly sometimes those who spent times with legends pass away without recording their memories.
Over the last several years there has been talk of the passing of the World War Two generation and the loss of their memories and tales.  Some authors and archives made efforts to collect these stories before they could no longer be claimed.  Sadly we are losing another generation of legends.  Only a few of Walt’s Nine Old Men are still with us and there are increasing fewer and fewer Disney Legends who helped Walt Disney build Disneyland.  Who would not have loved a memoir written by Ward Kimball or Marc Davis?  Let’s be honest every Disney fan would enjoy it!  We still have a number of these men and women that we can only call legends available to us and hopefully we will have them for years to come.  And over the next decades I hope we as a Disney community can capture as much of their memory as possible so the Between Kids and their kids can read and hear about what it was like working with Walt Disney, remembering that he was a person and not a company. 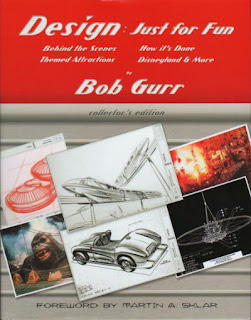 Bob Gurr in Design: Just for Fun recounts his life including how he became an Imagineer, the projects he worked on, and his life after Disney which can hardly be called a retirement.  Gurr outlines his childhood and his difficulties with the traditional educational system, urging parents of problem children that they may be parenting a creative.  He recounts how he joined Imagineering as a young adult, with no college degree, tasked to design Autopia.  Gurr would go on to contribute to a list of classic and beloved Disney attractions including the Main Street Vehicles, the Matterhorn, the Monorail, the Ford Magic Skyway, the Abraham Lincoln figure for Great Moments with Mr. Lincoln, and the Omnimover used in numerous Disney dark rides to just name a few.  Gurr goes in depth into the design of these attractions, including the choices he made, manufacturing, and performance.  After a long career with Disney, Gurr was laid off or quit depending on the story, and started his own design firm with its own impressive list of accomplishments including the Michael Jackson 1984 victory tour, UFO for the 1984 Olympics closing ceremony, the King Kong figure for Universal Studios, and the Treasure Island Pirate Battle show.  The book finishes with Gurr’s comments on design, how to become an Imagineer and what it was like working with Walt Disney.
Gurr provides tons of insight into how Disney designers and himself created.  A reoccurring theme is his use of stock parts.  In building the Monorail for example he did not attempt to create new components if avoidable, but searched through automotive parts catalogs.  By using this method he could ensure parts with service records and could avoid the need for specialized manufacturing.  One does not think stock parts when considering Disney’s attractions, but was an eye opener to realize how much under the hood was off the rack.  Another realization is the discussion of the use of contractors like Arrow Dynamics to build attractions instead of building in house.
This book is rich with Gurr having a lot to say based on a long and impressive career.  The book consists of short chapters, rarely longer than four to five pages.  Gurr is a designer and clearly not a writer.  The opening chapters on his early life are somewhat choppy.  And there are occasions where Gurr repeats himself.  Once he enters the chapters covering his design projects the text begins to flow more fluidly.  The writing is at times very technical and somewhat above my head.  Math is hard!  You can really tell he enjoyed his projects and loves building things.  The book is very richly illustrated with fantastic photographs of Gurr’s creations and blueprints.  Three are a few instances where the illustrations are distracting, with pictures dividing blocks of text  and the reader seeking to find the continuation of the thought on the other side of the picture.
This book is quite expensive.  Personally I had to think through very painfully if I would purchase the title.  In the end, I felt like it was something I could only read if I purchased it for myself.  You will not find this title in a public library.  It is extremely limited to 2,000 copies (1,000 red versions autographed and numbered).  Gurr explained in an interview with Moustalgia that he intended for the book to keep its value for collectors.  He argues he is not only selling a memoir but also a collector’s item.  At the time of this posting, there are only blue editions remaining.
Design: Just for Fun shows the depth of Bob Gurr’s work in themed attractions and provides his memories of working for Disney and others.  Where else can one read of a Disney legend laying underneath the Mad Tea Party to observe its wear patterns?  Gurr is a legend with fantastic stories to share.  Now fans can keep those stories within your Disney library with Design: Just for Fun.
This post is part of the Disney Blog Carnival. Head over there to see more great Disney-related posts and articles.
Posted by Between Disney at 5:25 AM