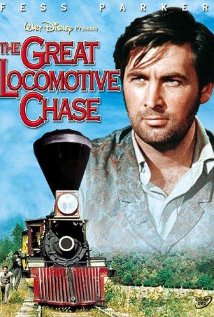 I had heard of 1956’s The Great Locomotive Chase several times as a Disney fan but had never seen it.  Recently I was able to borrow a copy, and I have to say it was really enjoyable.  The story behind The Great Locomotive Chase is the real life American Civil War Andrews Raid in 1862.  Union spy James J. Andrews led a group of Union Army volunteers to damage the railroad line into Chattanooga, Tennessee after stealing a Confederate train.  The men cut telegraph wires and destroyed parts of the railroad line as they moved north, being pursued by confederates in their own trains.  The movie dramatizes this chase as the Confederates attempt to capture the Union heroes.  After the incident, U.S. Army participants in the Andrews Raid were awarded the first Medals of Honor, Andrews was not eligible as a civilian.
It is easy to see why Walt Disney would have wanted to make this story into a movie.  First, it has trains.  Walt Disney was deeply interested in trains.  Additionally, it had had patriotic themes which would have appealed to Disney.  The overall result is an enjoyable and Mousey movie:

·         King of the Wild Frontier: Disney Legend Fess Parker stars as Andrews in this feature.  Parker made his name, and helped create a national sensation starring as Davy Crockett.  He appeared in one hour long episodes of the ABC Disneyland series in the “Davy Crockett” mini-series. Parker, in the tradition of Disney multi-platform stars, recorded a version of the theme song “The Ballad of Davy Crockett” which put Parker on the 1955 Billboard charts.  A personal favorite Parker moment is watching him dressed as Crockett with co-star Buddy Ebsen on the Dateline: Disneyland program chronicling Disneyland’s opening day.

·        Trains, Trains, Trains:  Did I mention Walt Disney liked trains?  There is a lot that you can say about Disney and his lifelong love of trains.  But it is probably best to start at the beginning.  Disney’s self-proclaimed hometown of Marceline, Missouri was a railroad town and he grew up around trains.  At age 15, Walt followed the footsteps of his older brother Roy O. Disney and became a news butcher.  What is a news butcher?  A news butcher sold newspapers, candy, cigars, soft drinks and other items to railroad passengers.  Disney worked for a brief time on the Missouri Pacific railroad as a news butcher.  He had the run of the trains he worked and helped establish a lifelong love of trains.  It is only fitting that Walt Disney would produce a movie where trains had a major role in the story.

·         Master Class:  Disney Legend Ub Iwerks is credited with special processes for the film.  There is honestly too much to say about Iwerks than can be given in a small paragraph.  Iwerks was connected to Walt Disney back to Disney’s days in Kansas City.  Iwerks was a co-worker at the Pesmen-Rubim Art Studio producing advertisements, business partner in the Iwerks-Disney Commercial Company and friend.  Iwerks had relocated to Los Angeles to join the Disney Brothers Cartoon Studio and served as the chief animator.  When Disney lost the rights to Oswald the Lucky Rabbit, Iwerks animated the studios new creation Mickey Mouse, effectively making him a co-creator of everyone’s favorite mouse.  Iwerks left Disney to start his own studio, Iwerks Studios, which was never able to find an audience in the 1930s.  During this time period he turned his interest to filmmaking tools, developing in 1933 a four level mulitplane camera providing depth to animated films.  Iwerks returned in 1940 to Disney employment and began working on special visual effects including his work in The Great Locomotive Chase.

·        The Black Hole:  The Great Locomotive Chase has ties to a latter Disney live action film after Walt Disney’s death.  Disney legend Peter Ellenshaw was a matte artist for The Great Locomotive Chase and provided miniature effects for 1979’s The Black Hole.  Slim Pickens in 1956 played Peter Bracken, the engineer operating the train that chases Andrews’ raiders.  In 1979, he voiced the robot Bob, a fan favorite, in The Black Hole.  Trains and space, who would have guessed?

·        Two Brothers:  One scene in the movie has Andrew’s men sharing a meal with southern hosts who do not realize the raiders are Northern soldiers.  Reflecting real history, this scene makes it clear that the United States during the American Civil War was divided on very personal lines; with not just the North and South being divided, but states, towns and even families.  It immediately took me to Great Moments with Mr. Lincoln at Disneyland and the Two Brothers segment, also shown at The American Adventure at Epcot.  This was a difficult time in American history and growing up in Missouri, a state divided during the war, the memory of this tension would have been very real during Disney’s formative years.

I really enjoyed The Great Locomotive Chase.  Overall I felt it was well acted and produced.  For reasons I still can’t explain it reminded me of another movie I love, The Great Escape.  I believe it was likely the chase scenes and the tension of possible capture that reminded me of this classic film.  It is a fine, but often overlooked, moment in Disney live action history that is well worth a viewing.
Posted by Between Disney at 6:45 AM