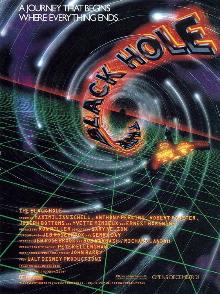 I’ve been really critical of Disney sci-fi properties.  I will continue to argue that if Tron and not John Carter serves as the Disney sci-fi standard, Houston we have a problem!  I wanted to find a Disney film that helped me show that John Carter was part of a tradition of some decent Disney sci-fi and was not just an aberration.  Searching the corners of my mind I remembered many a weekend afternoon as a child where with 4 channels and no VCR it was Read a Long Story records that replayed The Empire Strikes Back, Raiders of the Lost Ark and other classic stories in my mind.  And one of those worn out records was a Disney movie, 1979’s The Black Hole.
It has been decades since I had last seen The Black Hole.  And seeing it again frustrated me!  Frustrated me because we have talked about Tron and made it cult classic, while The Black Hole has been largely ignored.  Maybe it gets lost in the wake of Star Wars Episode IV: A New Hope.  With both films having roundish robots and standardized henchmen, maybe Lucas has overshadowed Disney.  I have to admit that both films also share a chase across a massive spaceship as the heroes attempt to escape the villain.  But honestly, though they share themes they are very different movies with Lucas using the heroes journey as a template and Disney using the quest for discovery as theirs.  There are so really interesting sci-fi additions too including an ESP connection between a robot and a human along with the back story of the robots that man the Cygnus.  And with a cast including the likes of Maximilian Schell, Robert Forester, Anthony Perkins, Roddy McDowell and Ernest Borgnine, we are given a group of actors who brought skill to the production.  Honestly, this may have been one of Disney’s Mouseyest movies ever:
·      Disney Legend:  Peter Ellenshaw was named a Disney Legend in 2003.  Ellenshaw served as a matte artist for numerous Disney films.  A few you may have heard of include Treasure Island, 20,000 Leagues Under the Sea, Old Yeller, Johnny Tremain, and Swiss Family Robinson.  He went onto special effects in other Disney movies including The Love Bug and this little picture you might not know a lot about called Mary Poppins!  Basically Ellenshaw built a career on the Disney live action Parthenon.  For The Black Hole, Ellenshaw created the miniature effects which make us believe that we are in space and not a studio.  For his efforts, the movie was nominated for an special effects Academy Award.  The effects for being over thirty years old really are good.  They may not of the Industrial Lights and Magic quality but they are believable, and you are sure you are looking at real objects and not animated effects.

·      Freaky Friday: Director Gary Nelson may have seemed like an odd choice to helm The Black Hole.  I do have to admit with credits including Get Smart, Gilligan’s Island, Gunsmoke and The Andy Griffith Show; Nelson did bring experience to the film.  And he had directed 3 films before The Black Hole, all for Disney.  So maybe it wasn’t his experience directing sci-fi epics that got him the job, and instead the fact he was a known Disney director after leading Jodi Foster through the original Freaky Friday.

·      The Final Frontier: Disney seems to think that humans need some living space.  In The Black Hole Captain Dan Holland’s (Forester) on the USS Palomino is exploring space for worlds to open up for humanity’s use.  If you want to explore this concept yourself, I suggest riding Mission Space at Epcot, so you can simulate a visit to Mars.  Sadly, no black holes though the location of the landing strip next to a giant canyon still seems odd.

·      Is that you Captain Nemo?: Is this movie The Black Hole or 20,000 Leagues Under the Sea?  You can’t help but compare Schell’s Dr.  Hans Reinhardt to Captain Nemo.  Both have vast intellects who find it difficult to be understood by mere men.  Both live solitary lives on vessels; one in space and one in the sea.  Both are surrounded by a crew whose loyalty is unquestionable.  And most of all both have fantastic beards!

·      The Son-in-Law: The Black Hole was produced by Ron Miller, which actually links The Black Hole to Walt Disney himself.  The former football player married Diane Disney in 1954 and was convinced by his father-in-law Walt Disney to enter the family business, film making.  Miller produced a number of films before becoming the President of Walt Disney Production in 1980 and CEO in 1983.  Miller left the company in 1984 in the upheaval that saw him ousted and Michael Eisner and Frank Wells joining the company.  Not looking behind him, Miller has thrown himself into the Silverado Winery and supported the development of the Walt Disney Family Museum.  And according to some Mousetalgia hosts, he is still a very handsome man to this day.

The Black Hole really does hold up over time.  It is well acted, has a good story and decent effects.  I do not understand how this is not a Disney cult classic.  It is a movie sci-fi fans, families and Disney enthusiasts can all enjoy.  It is Mousey through and through and maybe someday the rumors of a remake that surface every few years will come true.

Posted by Between Disney at 7:25 AM