Between Books - It's Kind of a Cute Story 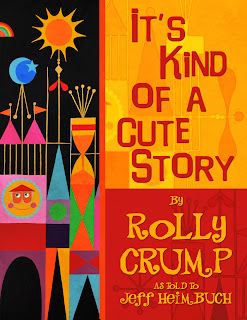 It’s Kind of a Cute Story by Rolly Crump as told to Jeff Heimbuch is the sort of book that Disney fans love. Crump details his Disney career starting in animation, being assigned to WED in support of Disneyland, and beyond using his artistic expertise to help others build their dreams using his expertise. As Crump would say, it’s kind of a cute story!

Crump was a self –trained artist who left a job in a ceramics factory to become an inbetweener in 1952 at Disney. It was a leap of faith, with his salary half his ceramics pay. As an animator he worked on films such as 101 Dalmatians for which he animated the spots, lots and lots of spots. In 1959, Crump was tapped to join WED Enterprises as a designer. Amongst his early projects was the initial development of a haunted house attraction with Yale Gracey which would later become The Haunted Mansion years later. Another early contribution was design work on The Enchanted Tiki Room, including the preshow Tikis. Crump, like all Imagineers, was pulled off his assignments to contribute to the 1964 New York World Fair. His contributions included collaborating with Mary Blair in the design of it’s a small world for which Crump oversaw the construction of the “toys” used by the dolls. He would later oversee the installation of the attraction at Disneyland. In 1967, Crump would become the Supervising Art Director at Disneyland, helping to shape the park experience for guests. Crump would go on to help reconstruct the magic on the East Coast within the Magic Kingdom Park. He would leave Disney employment and lead his own design firm for projects such as Circus World, Knott’s Bear-y Tales at Knott’s Berry Farm, and an ocean center for famed ocean explorer Jacques Cousteau. Crump would return to Imagineering to assist with the design of EPCOT overseeing the Land pavilion and unused concepts for The Wonders of Life pavilion. These are just a few of the projects in Crump’s distinguished design career documented in this memoir.

Crump’s design work shines throughout the book. There are numerous color photos throughout the book that highlight Crump’s style. The non-Disney work helps demonstrate how Crump’s personal style emerges in attractions such as it’s a small world and The Enchanted Tiki Room. By seeing something of Crump’s design outside of a Disney context actually makes Crump’s touches more transparent. Crump’s fingerprints become clearer and key pieces have an owner and are no longer crafted by anonymous artists. Additionally, the non-Disney pieces show Crump’s whimsical side. These include a poster series that sarcastically pitch narcotics, a series that Walt Disney saw. As Crump noted, Walt Disney saw Crump’s sense of humor as crazy around the edges. And the reader is able through Crump’s art to see how Disney came to this opinion.

The second star of the text is the Disney personalities. First and foremost is Walt Disney. Crump admired Disney and his leadership abilities. Crump largely worked for WED because of Walt’s vision and he originally left Disney employment due to the loss of that leadership. The next standout personality is Dick Irvine. Crump discusses his personality conflicts with the head of WED in-depth. Crump’s assessments are honestly one sided, a fact that Crump acknowledges. It becomes clear that while Disney celebrated the crazy around the edges Imagineer, others like Irvine did not know how to manage him. The third personality that rises to the top is John Hench, whom Crump depicts as a strong willed, opinionated and giving mentor. Crump clearly worries that his depiction of run-ins with Hench could negatively color the reader’s opinion of this Imagineering legend and he takes special care to fully discuss their complex relationship.

The book overall is easy to read, and Crump is a sympathetic figure. The reader truly comes to enjoy Crump and his personality. I was surprised to find that the text is oversized, almost appearing to be a thick tabloid style magazine instead of a typically sized book. With the book being oversized and colorful, suiting Crump’s personality, the hardcover version would be a handsome addition to any Between Books library. The softcover is a good value for the price, especially when compared to other similar memoirs. Honestly, the best value may be the Kindle version which like another Bamboo Forest offering From Dreamer to Dreamfinder, is priced as a steal.

It’s Kind of a Cute Story is a Between Books library essential! There may be a large number of Disney themed books, but not many that provide a firsthand account of working with Walt Disney, John Hench, Mary Blair, Marc Davis and others. And of course, Crump is a legend in his own right and I deeply enjoyed reading his accounts working for Disney and other clients. It’s Kind of a Cute Story by Rolly Crump as told to Jeff Heimbuch is an informative and personal story of an Imagineering giant that any Disney fan will enjoy.


Review Copy Provided by Bamboo Forest Publishing
Posted by Between Disney at 7:35 AM