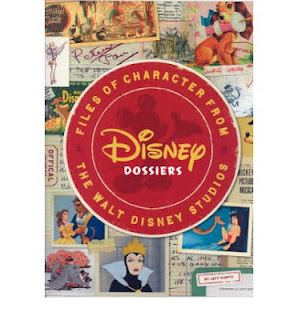 Jafar was based on another Disney animated villain.

Huey, Dewey and Louie are related to a prominent duck who is not Donald or Scrooge.

Lucifer the Cat in Cinderella had a real life model linked to a Disney legend.

These facts and more can all be found in Jeff Kurtti’s Disney Dossiers: Files of Character From the Walt Disney Studios.  Each page is designed to look like an open file folder containing personal records, pictures and random notes that would be useful to a Walt Disney animator or story man.  The characters covered are not exhaustive but detail the background on all major characters from Mickey Mouse to the animated features of 2006.  Some files include two page narratives discussing the character while others may only have two sentences.  Other pieces of information found in the descriptions include filmography, relationships, works well with lists, does not work well lists and summaries of key supporting characters or foils.  Some characters share pages, while other major characters like Mickey Mouse receive a multipage spread.

This is a fun book but not an exhaustive one.  The details provided on characters vary and some credit lists are selected only.  But the character selection is well done, with even The Reluctant Dragon being covered.  The facts that Kurtti provides do provide some ah ha moments for even the more knowledgeable reader.  The real fun of the volume is the pictures which include concept art showing us versions of the familiar characters that did not make the screen.  And it is fun to pretend that one is flipping through the confidential files of Walt Disney Animation.

Jeff Kurtti’s Disney Dossiers: Files of Character From the Walt Disney Studios provides a fun reading experience, and one that can be revisited to provide light entertainment.  It may not be deep enough for hardcore Disney researchers, but it would provide enjoyment to children wanting to know more about characters or casual readers.  And for both children and adults the images will likely be pleasing.  It is a nice addition to a Between Books library, but not as essential as some of Kurtti’s other works.
Posted by Between Disney at 5:26 AM