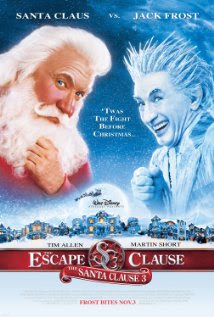 Since its 2006 release I have typically described The Santa Clause 3: The Escape Clause as a cash grab.  It just seemed like everyone was making one more grab at the good Santa money.  And it was a financial success, though a critical bomb.  The film lacked the charm one finds in the original, charm based on the happy accident of something truly wonderful being discovered.  But this year’s required viewing had made me soften.  There are still funny lines that make me belly laugh like a bowl full of jelly.  And the story has some edge to it in the villain of Jack Frost played by Martin Short.  And loving the franchise, there is some storytelling that I just noticed for the first time this year that pays off for the fan.  For example, it is only this year that I realized that the clothing choice of Neil played by Judge Reinhold in one scene tells us he has lost all his joy.  His choice of a professional and drab sports coat and sweater instead of his trademark colorful sweaters that Tim Allen’s Scott Calvin constantly mocks lets you know that his character has been broken by the problems of life.

Scott Calvin in the third film of the series has problems.  He has to balance the yearly rush of Christmas at the same time that Mrs. Claus nears the due date of their first child.  The demands of the new head elf Curtis pulls him between family and work.  To help provide relief to Mrs. Claus he brings the in-laws to the North Pole played by Alan Arkin and Ann Margret.  Of course they do not approve of the toy man who has taken their daughter away to “Canada.”  The pressure of keeping the Secret of Santa only adds to the pressure that Calvin feels.  Finally, Jack Frost sabotages Santa’s efforts to succeed at home and work.  Eventually Frost’s efforts lead to an It’s a Wonderful Life type sequence where Scott learns what would have happened to the ones he loved and himself if he had never pulled on the red coat.

There are no hidden Mickey’s in The Santa Clause 3 like we find in The Santa Clause 2.  But there are scenes lifted directly from the original The Santa Clause, which really tickles me as we see them from a new perspective.  Overall, this may be the most Mousey of all the movies in this franchise as it attempts to satirize the House of Mouse:

·        The Meanest One of All:  Jack Frost is the face of evil.  No really, he is a really horrible legendary figure.  He makes choices that have mortal consequences to beloved characters and he shows little to no remorse about it!  The Between Kid actually screamed and yelled, “I don’t like him,” as Frost was being almost murderous.  Additionally Frost is all about himself and ruins Christmas in a manner that only glorifies him and makes elves incredibly sad!  Yeah kids, beware Jack Frost.

Martin Short plays this villain and is highly familiar to Epcot fans.  Short originally starred in the 1989 film The Making of Me at the Wonders of Life pavilion.  The film discussed how Short’s parents met, got married, and made a baby!  I am kind of glad that I never had to watch this film with the Between Kids, and field the questions that it might inspire, with the closing of the pavilion in 2007.  In 2008 Short moved to the Canada pavilion to narrate the O’ Canada film where Short shares about his native country.  Short has also been part of a number of Disney releases including Jungle 2 Jungle with Tim Allen, Treasure Planet, 101 Dalmatians II: Patch’s London Adventure, Frankenweenie, and Touchstone Pictures releases Father of the Bride and Father of the Bride II; placing Short in live-action, animated, theatrical and direct to video projects.

·        Carpet Bagger:  In a scene that has to be a tribute to Mary Poppins, Scott when visiting the Miller family digs around in a carpet bag.  It’s clear as he reaches in with much more arm than he should that the bag’s inside is bigger than the outside.  This effect is helped by the sound of crashing objects and farm animals in the bag!  The object he pulls out as a gift for his son Charlie, much like Mary Poppin’s hat rack, is much bigger than the bag itself.

·        Theme Parks:  The most Mousey moment in the movie is the North Pole’s transformation from a workshop into a Disneyland style resort.  The North Pole Resort may remind many of visits to Disney parks with crowds, overpriced merchandise to buy everywhere, staff hiding behind forced smiles and crying children wanting more more more.  Yes, it is all the bad things one might expect from a theme park gone bad.  Instead of looking at the North Pole Resort as a satire on the reality of a Disney parks experience, I look at it as all of our bad experiences at once!  It makes sense.  Disneyland and other Disney parks create magic.  The North Pole Resort perverts magic instead, much like the days that heat and tiredness may make families grumpy!

·        O’ Canada:  Speaking of Canada, the North Pole with the arrival of the in-laws is transformed into Santa’s very own Canada pavilion.  The signage and set design honestly makes me laugh, with signs that make sure you understand you are in Canada, not the North Pole or Epcot.

·        Buddy:  Liliana Mumy returns to her second Santa Clause film as Lucy Miller, or the cute human kid replacement for Charlie.  Lucy has a big warm heart, somewhat different than her character Mertle Edmonds in the animated Lilo & Stitch, Stitch! The Movie, and Lilo & Stitch 2: Stitch Has a Glitch.  Mertle is spoiled and has a cold heart!  I chose team Lilo!  Mumy also voices the puppy Rosebud in the live action Snow Buddies, Space Buddies, and SantaBuddies where she again addresses snow and Santa!  Ironically, the name Buddy is found not just in the non-Disney movie Elf but the ending of this jolly franchise.

The Santa Clause 3: The Escape Clause is my least favorite in the Santa trilogy.  But Tim Allen still continues to satisfy me as a regular guy struggling with being a family man and the spirit of Christmas.  This installment is also darker than the others as Calvin fights not himself or a plastic doppelganger but an external villain who has no problem terrorizing others.  The film’s story with The North Pole Resort was directly inspired by Mickey’s home, where like Santa you can visit the Mouse in his home!  So even if they were trying to subtly attack their Mousey Masters, they made the film very Mousey.

Posted by Between Disney at 5:32 AM