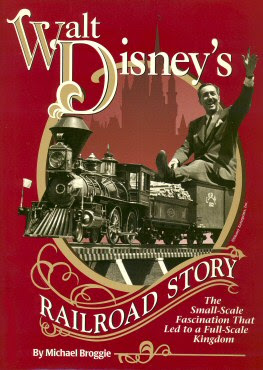 Let me be honest, Walt Disney’s Railroad Story: The Small-Scale Fascination that Led to a Full-Scale Kingdom by Michael Broggie is one the best Disney history books that I have ever read. It is clear, informative, exhaustive and wonderfully illustrated with photos. If you are able, you should consider adding this volume to your Between Books library.

Michael Broggie, the son of Disney Legend Roger Broggie, masterfully details Walt Disney’s love of trains, their emergence in his life as a hobby, their inspiration for the Disneyland Park, and their presence globally in Disney parks. Detailed is an understatement, with 400 pages of Disney train history and photos. Broggie starts his history with Walt Disney’s boyhood train experiences including selling newspapers and concessions as a news butcher. Broggie then jumps to the 1930’s when the successful Walt Disney sought a new hobby to replace the physically tasking polo to help release his stress. A 1932 visit to the Chicago Railroad Fair with animator Ward Kimball helped reinvigorate Disney’s interest in trains. This inspiration leads to Disney becoming interested in miniature railroading, building an extensive track for his miniature engine Lilly Belle behind his Holmby Hills home in the Los Angeles area. Disney’s backyard became a weekend retreat for family, friends, fellow rail fans and even business contacts. But after an accident with a child, Disney began to question if his backyard setup was ideal and began to look to bigger endeavors. This new challenge would be the Disneyland Park, which had to have a train. Broggie outlines the history of the Disneyland Railroad, originally known as the Santa Fe and Disneyland Railroad, including the track layout, the construction of the engines and passenger cars, and train stations. Broggie then follows with a history of the railroads of all the Magic Kingdom parks. He also includes brief histories of train inspired attractions such as the Monorail. The book closes with appendices sharing information about the Disney trains including a complete roster of the Disney trains at the time of publication.

For me one of the highlights of the book really was the story of Disney’s Lilly Belle. Broggie’s detail of Walt’s personal train is extensive, detailed and fascinating. One comes to understand how much Walt loved this hobby set with him hand building much of train himself. And one can see the connections to Disneyland as his personal railroad became more ambitious and drew greater attention. One’s heart almost breaks as you read of Disney’s decision to quit operating at home, but it is quickly replaced by excitement as you realize the next step of Walt’s imagination is Disneyland.

Walt Disney is not the only Disney legend highlighted in the text. Ward Kimball is profiled extensively, including a description of his full size railroad in his backyard. Additionally Broggie details the at times rocky relationship with Walt Disney, including over train issues. Ollie Johnston’s full size and miniature collection is also discussed. And of course Broggie’s father Roger who ran the machine shop within Walt Disney learned the skills needed to build the Lilly Belle and who’s watchful eye helped Disney bring his personal engine to life is featured extensively throughout the book.

The text is clear and easy to read. And it is illustrated beautifully with numerous photos. But I will admit I read this book slowly, enjoying it’s content instead of running through it. A true advantage to Broggie as a writer is his personal experiences. When he writes about Walt Disney, he does not write about Disney from a distance. Instead, Broggie was a boy who grew up around Walt Disney as he enjoyed his hobby and visited the Holmby Hills railroad. Many of the text’s pictures are from the Broggie family collection. He writes from experience as he enjoyed Disney’s hobby firsthand.

The only drawback to Walt Disney’s Railroad Story is the price. With the first edition out of print it can be found used well over $100 in the secondary market. The Carolwood Pacific Railroad Society, formed to help preserve Disney’ railroad legacy, currently sells the third edition of the book for $69.95, for those looking to avoid the markup of used editions. It is truly a delightful book that has already inspired in me to start at least one future project and a trip to a local train museum.

Michael Broggie’s Walt Disney’s Railroad Story is one of the finest Disney history books I have read in the last year. It is easy to read, dives deep into an important aspect of Disney history and is enjoyable. I feel like it is one of the real gems in my Between Books library and anyone who has a copy should feel themselves lucky!


Postscript: I have to admit; I really did not think I would ever own a physical copy of Walt Disney’s Railroad Story. But it was through the efforts of a friend of a library a 1,000 miles from my home that I was able to find an affordable copy. Please remember to support your local libraries. You will likely be surprised by the Between Books you can find on their shelves. And if you have the opportunity to support them financially through book sales and other donations, I highly recommend it, as library holdings are a true resource for book fans.
Posted by Between Disney at 8:30 AM