Between Books - The Unofficial Guide to Disneyland's Haunted Kingdom 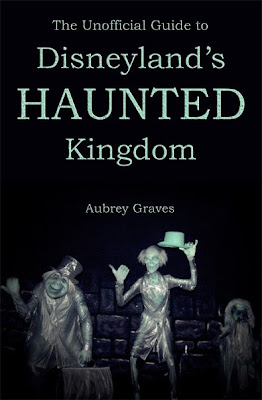 I have wanted to read a book about Disney parks and ghosts since I was exposed to the tale of George the ghost at Pirates of the Caribbean in the Magic Kingdom Park. I do not like scary things or being scared. And when it comes to ghosts and the supernatural I am largely skeptical. But for some reason the ghost investigator reality shows have become a guilty pleasure for me. So of course I would want to hear more about these phenomenons in one of my favorite places on earth.

Paranormal investigator, and Disney fan, Aubrey Graves in The Unofficial Guide to Disneyland’s Haunted Kingdom introduces readers to the stories of ghosts and spirits that have been reported by guests and cast members within the park. Graves tours the park visiting each land within the Disneyland Park, providing a brief description of highlighted attractions and then recounting stories that have been told of spiritual forces. Each attraction and its ghost stories are recounted in a few pages. Additionally, the book is illustrated with clear, crisp, color photographs, with only one modified to show a specter.

The Unofficial Guide to Disneyland’s Haunted Kingdom for me falls within the genre of guidebooks. The attraction descriptions that Graves provides could easily be found in the typical Disneyland guide. The descriptions are clear and short. I was surprised to find the Columbia referred to as The Gem of the Kingdom. I thought this was an error, but a Google search matched this title with the Columbia and I had learned something new! The difference between this book and other guides are the ghost stories that accompany the descriptions. The stories are typically not overly detailed, and honestly in some cases I would like Graves to give me more information. Since I have read several guides, I would personally have wanted more ghosts and less attraction details. But with every attraction covered in just 130 pages, space may have been limited for some of the stories that lack background. I did find some of the in text reference clunky with one story being cited to “blogspot.com” without the address to the actual posting. But the references at the back are very detailed and provide full citations.

One could easily use The Unofficial Guide to Disneyland’s Haunted Kingdom and additional information about Disneyland deaths in books like David Koeing’s Mouse Tales to setup a self guided Disneyland ghost tour. I submit to you based on this guide the Between Disney Unofficial Self-Guided Disneyland Ghost Tour:

I am still skeptical. But, conversations I had with coworkers as I read this Between Book made it clear that many have stories to tell of their own supernatural encounters, just not in such interesting locations. Graves argues that not all the ghosts at Disneyland passed away within the park. Some she argues are those who enjoyed the park and may have even seen it as a home. One of these reported spirits, seen throughout the park, is Walt Disney himself. Part of me, even the skeptical part of me, likes the idea that if I am inclined once I am on the other side I could visit my beloved Disneyland and maybe even share a trip on the Grand Circle Tour with the man who first dreamt of this park….even if it was just in spirit!


You can purchase The Unofficial Guide to Disneyland’s Haunted Kingdom at Amazon.


Review Copy Provided by Author
Posted by Between Disney at 5:37 AM