Between Books - The Revised Vault of Walt 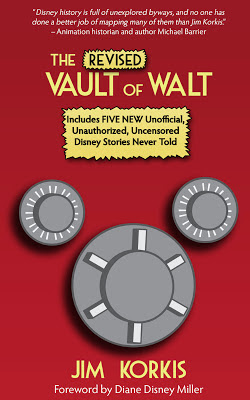 Jim Korkis in The Revised Vault of Walt makes some of his earlier writings found in the out-of-print The Vault of Walt available again in print. In this newly revised edition some stories have been removed, largely to make a smaller edition. In this new version, 14 of the original chapters have been removed, with five new additions in their place. The new five chapters cover:

Otherwise the stories carried over from The Vault of Walt appear largely unchanged, except for some editing to the “Introduction”.

I think the first obvious question is why a revised edition? The clearest reason is the original The Vault of Walt is now out of print and not readily available. With a new publisher who has bought the content and which also published Who’s Afraid of the Song of the South it was decided to put a new edition into the market. Korkis states in “The Welcome to the Revised Edition”,


I wanted a more streamlined, travel-size version available at a more affordable price. It was agreed that doing so might attract new readers who were intimidated by the size and the price of the original edition, despite all the good reviews.

And honestly, one of the first things I noticed when I saw my copy was the smaller size of this revised edition. Which of course lead me to seek out what was removed.

Since the chapters are essays the removals do not take away from the remaining chapters. Some removals seem logical, such as “Song of the South Premiere” which is a topic now covered now in Who’s Afraid of the Song of the South. Others like “Santa Walt” and “Return to Marceline 1956” were some of my favorites since they covered the lives of Walt and Roy O. Disney. I am one of these readers who was not intimidated by the size of the first edition. In fact, I reveled in the original, giving myself three weeks to savor the book. But Korkis and his publisher do promise a Vault of Walt Sampler for Kindle in the future containing the missing chapters.

Of the new additions, they are typical of Korkis’ writing, so Korkis fans will enjoy the style. They are clear and factual. The chapter of Walt Disney’s food favorites led me ask if the Between Wife would make Walt Disney’s chili recipe, I was told she liked her’s better. Despite her resistance, the chapter really shows how Walt Disney’s tastes were simple, likely due to his upbringing. And the chapter on the Academy Awards really highlighted for me the recognition that Disney received for his film innovations. And the chapter on Bardeau provides an intimate glimpse of Walt the man and employer to me. The only one that did not hit with me was Song of the South chapter, mostly due to the fact I have Korkis’ full book on this topic. The FAQ really just highlights topics you can find more in depth in that book.

When I reviewed The Vault of Walt I stated, “This book is excellent and should be on the shelves of every Disney library.” So is this statement still true. First, I am someone who liked the bigger edition, and even with the additions the revised version is 9 stories short. Some may actually enjoy this fact due to the smaller size. But some of my favorite chapters are now absent. And this new edition seems to have a printing problem in the second half of the book with type that appears smeared though still readable, in my copy. But, the original is out of print! And honestly, the secondary price for the original is outrageous. Just checking as I write this review there are copies listed on Amazon for over $500. So I simply cannot recommend seeking out the original. If you did not get a copy of the original, you must purchase The Revised Vault of Walt, since it financially makes sense and has plenty of the content I enjoyed in the original. Then once the Kindle sampler is released, you will be ahead of the game with access to more tales than the original offered. If you own the original, I would suggest the Kindle edition to get the new essays for a lower cost than a print edition.

I found The Vault of Walt to be a surprise hit for me. And I am thankful that Theme Park Press and Jim Korkis have found a solution to make most of this content available at an affordable price. When their plan is complete, we will all have access to more content that the original provided without missing a few car payments.

Update: The publisher contacted me after posting this review and reported he completed a check of the copies he had on hand looking for smeared ink.  The copies he had did not have the ink issue, so this is not an universal issue and my copy is likely an exception.

On a side note, this is really why I enjoy working with independent publishers, responsiveness.  These publishers generally listen to the fans and their concerns.  So thank you Theme Park Press and others that I have reviewed for in being attentive to your customers and fans.
Posted by Between Disney at 5:37 AM

Email ThisBlogThis!Share to TwitterShare to FacebookShare to Pinterest
Labels: Academy Awards, Between Books, Jim Korkis, Roy O. Disney, The Song of the South, The Vault of Walt, Walt Disney