Dreaming Disney - Strangers and Aliens The Wonderful World of Disney 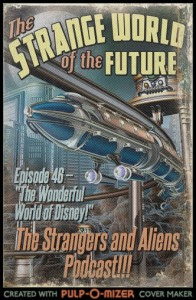 We were shocked to discover that most of the films we listed were modern and far from classic.  And I was probably the worst offender with my very first submission!  I was also shocked that one of the hosts stole one of my favorite movies of all time right from under my nose.  Additionally, I found myself defending The Little Mermaid.  Honestly, I think I could have done better, but I was in shock to hear an attack on the movie that saved Disney animation.  Being a faith themed podcast we also discussed spiritual themes in Disney animation.

It was really fun to sit back and discuss cartoons with three other grown men.

Posted by Between Disney at 5:33 AM