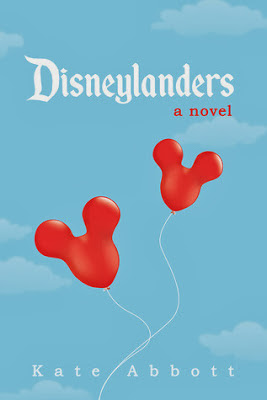 “I wasn’t in the mood for a Dole Whip with a paper umbrella,” could this be the most offensive words in the history of Disney fiction? Okay, I jest, but they help show the tone of Disneylanders by Kate Abbott, the story of a girl who has problems big enough that even Dole Whip cannot solve them.

Disneylanders by Kate Abbott tells the story of Casey, a 13 year-old girl on vacation in Disneyland with her parents. Casey is going through a lot of changes in her life. She is getting ready to transition into high school, which in itself is scary. At the same time her best friend has become popular and has dumped her for more popular kids, and boys! And her body is changing, as evidenced by her constant thoughts about bras. Her parents seem completely oblivious to the fact that she is getting older and provide little to no sympathy to her problems. While vacationing at Disneyland, she meets Bert a 15 year-old boy who becomes her vacation companion, confident and her first boyfriend. The two spend as much time possible together in Disneyland as they attempt to better understand themselves and get to know their first real crushes.

Disneylanders is not the type of book that I would generally pick up for myself. The audience is much more teen and young adult female readers than middle-aged men who read Disney history and comic books. Still I did find myself getting enjoyment from the book and that it kept my attention. Casey’s parents are in many ways unlikeable, yet I found myself thinking about them and relating to them while I read the book. Much of this has to do with the fact that I see myself in their boat, and not just the one on it’s a small world, in a few years since I do not want the Between Tween to grow up. Someday, and someday soon my Disney trivia will no longer be as interesting. At least I do not sport socks and sandals. So despite the fact I felt like it was not intended for me to like them, I felt for them. And they are right; you need to let your parents know if you go swimming! So despite the fact that I did not relate closely to the main character, I did find much to ponder. And no, the Tween is not allowed to hang out with boys on our next Disneyland vacation.

Abbott does an excellent job of using the park as background for her story to take place in. The park is not the star, it is the scenery. But it is used really well and in such a way that it helped me enter the story more clearly than if it had been set somewhere I was not familiar with. Her description of the hard stop on it’s a small world has stuck with me because Abbott nailed it. I can feel that stop in my bones and her use of it helped me stay in the story. As Casey and Bert worked their way through queues, I could picture their locations. Abbott knows her Disneyland!

The book itself is well written and easy to follow. Abbott’s characters are ones that the reader can either easily relate to or feel for quickly. The story is romantic, yet safe and parents should have no concern with tween and teen readers choosing this title. I read the Kindle version of the book and it was excellently edited and I was never distracted by the format.

Disneylanders is a good summer reading choice. It will probably be most attractive to teens and young adults who like relationship centered stories. And for those who like those books and Disneyland, you really are likely to enjoy this. But I will warn you; the book is probably not the light fare some may hope for. Since many readers are going through, have gone through, or will be the parents of those going through the key life transitions described, you may find yourself considering how you want to succeed or how you could fail in those real life situations.

Posted by Between Disney at 5:35 AM