Between Books - Earbook 2012: One Fan's Review in Pictures 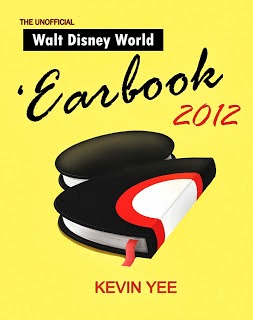 The Unofficial Walt Disney World Earbook 2012: One Fan’s Review in Pictures by Kevin Yee is a pictorial chronicle of events at the Walt Disney World Resort during 2012. The book contains month by month chapters that provide visual representations of major events that occurred in the resort. Events covered include a multiple page spread remembering Snow White’s Scary Adventures which closed in May and the short-lived first version of Habit Heroes which was closed shortly after opening during to guest complaints. The book closes with an appendix that provides information about selected prices for accommodations and tickets during 2012, and prices for one day in June across the resort.

Honestly, I did not know what I expected. But I did not expect what I got, this text really is a yearbook for Walt Disney World. It is very photo based with a minimum of text. And it is relatively short, one can scan through this small book in less than 30 minutes. The pictures really are a star. And for someone who did not visit the resort in 2012 it serves as a visual resource to the events I did not take part in. The chapters vary by length with Snow White’s Scary Adventures in May receiving a five page spread, while the entire month of March only got 3 pages. But the length is likely determined by events which occurred. I wonder how the chapters will land for 2013 with Limited Time Magic. And I am guessing some events will not even make the pages of the 2013 edition. It is short on commentary. And I would have liked additional commentary for events like the closing of Habit Heroes’ first incarnation beyond saying it was criticized in the press. But again, one gets the sense this is intended to be a factual record not a editorial on the park. One thing that I really stands out in this book, especially being a self-published project, is the Index. So many small publishers/author published books lack an index. Earbook 2012 has an extensive and useful one.

Earbook 2012 may not be a book for everyone. Some guests who visited the park in 2012 may wish to pick this up as a scrapbook of a year they visited the Walt Disney World Resort. Disney history fans may want to consider this as a reference with the pictures and price snapshots. And the other Earbooks when examined together could help tell the story of the changing resort. For me living in Betweenland, Kevin Yee gave me a glimpse of Walt Disney World from a year I never experienced in the park.

Posted by Between Disney at 5:37 AM