Between Books - Avengers vs. Thanos 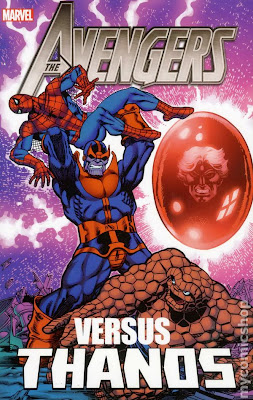 To provide a minor spoiler, I was saddened that the Iron Man 3 did not provide an overt reference to the villain Thanos. Since we were teased that Thanos was involved in the events of The Avengers I have assumed that he would return to the Avenger Initiative sometime in the near future. In fact I assumed that we will find that the movies of Phase 2 were all linked to Thanos, even if we are not shown the obvious clue in the first viewing of these offerings. The number of Marvel Thanos related projects, such as Avengers vs. Thanos, helps reinforce to me that Thanos is coming and I want to know as much about this super villain as I can.

Avengers vs. Thanos collects Thanos’ early appearances in the Marvel universe starting with Iron Man #55 in 1968 into appearances in the last 1970s. The stories frame Thanos as the conqueror of the moon Titan who seeks to expand his reach onto Earth. Amongst the tools that Thanos uses to implement his schemes are the Cosmic Cube. Readers also see a reoccurring pattern where Thanos uses people as puppets. Many of these stories go beyond Earth and have galactic settings as the scope of Thanos’ ambition grows. Throughout these stories Thanos fights the Kree Captain Marvel, Daredevil, Adam Warlock and the Avengers. Along with the introduction of Thanos the volume also introduces Drax the Destroyer and Gamora.

My first thought is where are the Avengers? I think readers should safely assume, by the title, that Thanos will be fighting the Avengers team throughout the volume. This is largely wrong. For the bulk of this volume Thanos’ major opponents are either Captain Marvel solo or Adam Warlock. The inclusion of the Avengers of a team is rare, though Avengers like Iron Man may have solo adventures against the Mad Titan. Honestly, I think a better title would just be Thanos! But honestly that title probably would not get casual comic readers to grab it off the shelf in a bookstore, where a link to the Marvel Cinematic Universe and the Avengers would.

I think one of the biggest revelations for me was that Drax the Destroyer was created solely to fight Thanos. And despite his non-human appearance, he is in fact a deceased human. This helps me understand why Star-Lord Peter Quill is able to get him to rejoin the Guardians of the Galaxy when he clearly does not trust Quill. He still has an attachment to his home. Also, in this volume we see the origin of another Guardian Gamora, who was raised by Thanos. However, her discovery of plans for a global genocide turned her away from her master. So to me this book supports The Guardians of the Galaxy film much better than it does Avengers 2.

The stories themselves are products of their times. But I feel that they are good quality when compared against other stories of that era. The art also varies, but overall what is presented is good stuff. I would not call the book one of the greatest trades I have ever read. But I did think it was good. But I am glad that I borrowed and did not buy this volume since I am likely not to pick it up again.

Thanos is coming to the Marvel Cinematic universe. While that Thanos will likely differ from the one in comics, Avengers vs. Thanos recounts the source material of Thanos’ early appearances including first instances of key Guardians of the Galaxy. The volume is definitely an interesting read from those wanting to prepare themselves for Thanos and his future confrontation with whatever Avengers are in the hero stable in the future.

For more reviews like this about the Marvel Cinematic Universe visit www.welcometolevelseven.com.
Posted by Between Disney at 6:03 AM

Email ThisBlogThis!Share to TwitterShare to FacebookShare to Pinterest
Labels: Avengers, Between Books, Captain Marvel, Guardians of the Galaxy, Marvel, Thanos