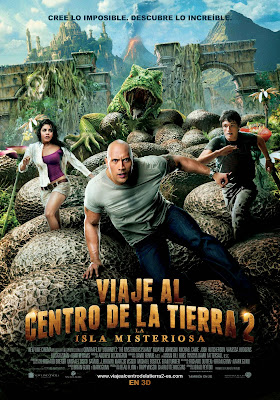 Recently one of my friends has been arguing way to hard that Dwayne “the Rock” Johnson is the most important actor in Hollywood. Now I have to say that off the top of my head I think that both Johnny Depp and Robert Downey Jr. have more prestige with both insiders and audiences. But he responds back with box office figures. He has a good point, but I still don’t believe that the Rock could negotiate the type of deals that Captain Jack Sparrow and Tony Stark can pull down. With this debate in the back of my head I recently caught Journey 2: The Mysterious Island.

Josh Hutcherson returns to the Jules Verne stories in this sequel to Journey to the Center of the Earth. He plays Sean Anderson, teenage adventurer. Sean now lives with his mother and stepfather Hank, played by the Rock. Hank struggles to connect with Sean. And in an attempt to disprove the existence of Verne’s Mysterious Island, where Sean believes his grandfather is marooned, and bond with the young man Hank takes the teenager on a trip to the island Palau. One does have to admit there is a flaw in Hank’s plans since Sean has been to the center of the Earth! The two along with their helicopter guide Gabato and his daughter Kailani, find the island, a lost city, Sean’s grandfather and danger in this Mousey Movie:


Personally I think Walt Disney would have given a thumbs up to Journey 2: The Mysterious Island. It is a family based adventure, where families have real struggles that they work through in front of our eyes. And when I say struggle, I do not mean those against giant bees but those within the battlefield of interpersonal relationships. And Disney clearly found Jules Verne’s writing a good source for mining material for his own movie. Yes I think Walt Disney would have approved, and wondered perhaps why his studio did not distribute this film.

And I do have to admit my WWE inspired friend, the Rock did a nice job!