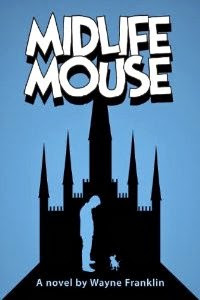 When I first opened Midlife Mouse by Wayne Franklin I had no expectations.  I was attracted to it  because of the Disney hook and the fact that I do feel like I need to open myself up to the wider world of fiction.  But as a middle aged man, who still feels 16, I really did not believe that a story of one man's midlife crisis would actually pull me deeply in.  Three days later, I reached the point where one character's true identity was revealed,  I smiled and mentally congratulated Mr. Franklin on a job well done!  Because he has truly written a fictional story that Disney fans, especially history fans, will love!

Midlife Mouse tells the story of Bill Durmer.  As we open the book we find Bill and his daughter holed up in a Walt Disney World hotel room as they are surrounded by the WDW Swat Team (yep I said it).  We begin to flashback through Bill's life and we learn that Bill is a solid family man and citizen within his Alabama hometown.  However, Bill's life has taken a downward turn as he is forced to close his family business and his coastal community experiences a disaster which Bill blames on himself.  Bill believes the key to rediscovering his purpose lies at Walt Disney World, a place where he was truly happy.  He runs away to the resort with one of his children and begins an adventure steeped in Disney history as those who continue the traditions of Walt Disney seek to discover if Bill is the fulfillment of Walt Disney's last great prophecy.  Along they way, Bill faces danger, fantastical situations, Disney historical truths, and a journey of self discovery to rediscover his purpose.

Bill Dumer's story is one where two genres collide.  First, Franklin provides us the drama driven midlife crisis story.  This book lives in the same neighborhood as fictional books like Our Kingdom of Dust, where our main characters attempt to escape the complexities of their life by fleeing to Walt Disney World so they can be happy.  This theme can also be found in non-fiction books like Cast Member Confidential, proving people do run away to Mickey in real life.  But compared to both of these examples Midlife Mouse is a more family friendly offering.  I would let the Between Tween read this book if asked.  However, Our Kingdom of Dust is something the Between Tween is still a few years away from due to the intense imagery.  Second, Midlife Mouse is a fantastical mystery adventure.  I kept getting the feeling that the story was an adult Kingdom Keepers.  Franklin's tale is full of mystery and secrets within Walt Disney World, where one is not only taken on a ride but also learn real Disney history in a fictional book.

The mystery adventure revolves around a prophecy made on Walt Disney's deathbed.  Durmer and the reader discover that a group of nine separate Disney fans/employees are either seeking the fulfillment or delay of Disney's last prophecy.  I was delighted that each of the groups was descended from Walt Disney's Nine Old Men.  So for history fans, Franklin tickles the imagination by using names like Marc Davis and Ward Kimball in the fictional mystery.  I smiled as I read how each group descended from the original Legends to others including Mary Blair, Don Bluth, Card Walker, Frank Wells, and I believe Jefferey Katzenberg (not mentioned by name) amongst others.  And I really enjoyed how the groups dealt with the problem of Ollie Johnston and Frank Thomas due to their close relationship.  I felt the fictional edits to the histories of these real life legends was true to their histories and legends.  The mystery also allows Franklin to share some of his own opinions on the current state of Disney and Disney fandom.

The midlife crisis portion of the story is highly effective and makes you feel for Bill.  I am guessing that most people have someone like Bill's sister Nancy in their lives, loving but controlling.  And as a husband and father I could feel the complexity of his personal problems.  Though I probably could not run away to Orlando without the Between Wife!  I think anyone who is at the midpoint of their life can understand much of inner dialogue and quest for purpose.

Midlife Mouse is billed as a Southern fantasy.  I was concerned living in Betweenland I would be missing some of the color of the story.  I found that was not a concern.  I felt Franklin did a good job of giving Bill's hometown of Decent Chance the color of the south from sweet tea to religion in a small town without leaving me behind.

I think the release timing of Midlife Mouse is perfect.  This text is a great summer reading choice.  I could see carrying this to the beach, on the airplane or a comfy bench in a Disney park (okay that's a lie I can't read in a Disney park when there are rides to be checked off.  My only complaint is Franklin refers to Walt Disney World as Disney World.  But when I found out the identity of Bill's spiritual guide Red, well everything was forgiven (really that's all I could complain about).  You can't go wrong by grabbing a copy of Midlife Mouse and taking yourself through a mystery through the Magic Kingdom Park.

Posted by Between Disney at 5:37 AM