Between Books - Our Kingdom of Dust 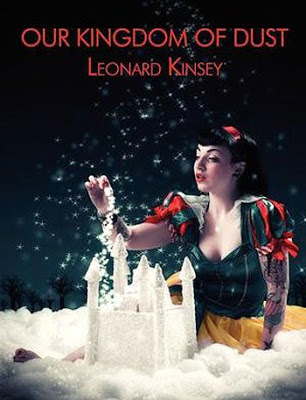 Several months ago I was emailing with publisher Leonard Kinsey discussing a review copy that he was sending to me. I felt bad because I noted I did not want to review his first fiction offering, Our Kingdom of Dust. I said no for two reasons. First, I did not feel comfortable reviewing fiction at that time. Second, the subject matter just did not feel like a good fit for me. But despite the fact I wanted nothing to do with this title, I could not resist picking up a Kindle copy from Amazon due to the really affordable price and the fact that Leonard has been very kind to me, which made me want to check out what he had put together.

Despite the fact that I had purchased it, it sat on my Kindle shelf for months. In the meantime, I enjoyed another Disney fictional story and some history, but I never cracked the virtual cover. Then I found myself on a family trip reading a fiction book in another genre and I found myself a little bored with that title. After this realization, I decided one morning to finally crack open Our Kingdom of Dust, even though I knew I would hate it! But, it would help pass the time until I was ready for the other book again. Several hours later, I found that I had finished the book and had not even considered Star Wars. Well played Leonard Kinsey, well played!

Our Kingdom of Dust follows the fictional Blaine McKinnon. Blaine had been successful in the business world, making his millions young. But on the personal front, his life could only be called tragic. After one last straw, McKinnon decides to take his fortune and retreat to the Walt Disney World Resort, a location filled with many happy childhood memories with his late parents. While holding up indefinitely at the Boardwalk, he befriends Jay, a tattooed Disney superfan (I mention the tattoos only because they are all Disney themed) and drug dealer. Blaine, who has not been lucky in love, falls for Jay’s girlfriend Lisa, who is a friend of Snow White. Through Jay and Lisa, Blaine enters a world of deeply broken people who use Jay’s custom drug, Pixie Dust. Pixie Dust does what all real world drugs do in that it helps Jay’s customers hide from their real world problems. Blaine is faced with overcoming his own issues and helping Jay face his demons, all while contemplating if he should seek a future with Lisa. The story successfully wraps ups the threads of every character’s story, though not everyone receives a Walt Disney designed happy ending!

For a first fictional offering, I really have to applaud Kinsey. In the first ten pages he hooked me as a reader, in a genre I would typically never read. He had left me feeling for Blaine and feeling sorrow for his many many loses. Additionally, he built pictures in my mind that took me to a dark sad place. I felt sorrow for his characters. Honestly, as a dog fan, the last scene of Blaine and his dog, Sam, rocked me to the core. As the pages progressed, he brought me into the mood of the story. Honestly, at one point, I had to read with an adult beverage in hand in order to escape the fictional world in which I was spending so much time. I also found myself telling the Between Wife things being done to Blaine, especially in the early pages. I was reminded she planned on reading it later and I needed to avoid spoilers. I think it is safe to say that I was really drawn into Kinsey’s world and placed the book of a bestselling Sci-Fi author in an universe that I love aside for a Saturday. No idea what this last sentence means

Kinsey also does an excellent job with the Walt Disney World Resort setting. He does an excellent job of painting the scene, which is telling of his frequent visits to the Resort. My favorite detail was him discussing the small lizards one encounters while walking from place to place. And with this story set during Epcot’s 25th Anniversary, Kinsey takes us back to that version of the park complete with Mickey’s wand attached to Spaceship Earth. I admit I really enjoyed reading Blaine’s reactions to this version of Epcot after a long absence. Additionally, Blaine’s reaction to the removal of Horizons brought a smile to my own face. And of course, his reaction to the Imagination Pavilion and his guest comment card were moments I found hilarious.

Who will enjoy Our Kingdom of Dust? I will admit it is outside of my general interests, being a realistic drama. The fact that it included the Walt Disney World Resort was the hook that brought me in. This was supported by the fact that I was happily surprised by Kinsey’s guidebook The Dark Side of Disney. Without these, I probably would have never picked up the book. I did find that the setting is very adult in nature and there are some graphic images especially around one death that I cannot shake and some may find disturbing. I think those who enjoyed the non-fiction books Mousetrapped and Cast Member Confidential would likely enjoy this fictional tale of broken people in a magical world.

Our Kingdom of Dust with its adult situations and drug storyline may not be for every Disney fan. However, Kinsey’s writing is engaging and he draws you into a world of broken souls. If one is willing to give it a chance, especially with its low Kindle price, it can take you to another place for a few hours. And it might just remind you that you are not as broken as you think.
Posted by Between Disney at 5:34 AM