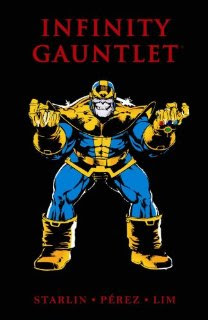 Do we really have to wait until 2015 for The Avengers 2? Yes I know we have Iron Man 3, Thor 2: The Dark World, and Captain America 2: Winter Soldier to pass the years. But I really do not want to wait until 2015 to resolve Thanos and his plans for earth. I want to know what is going on now. So, I created my own shortcut and I read Infinity Gauntlet, collecting the Marvel mini-series from 1991. Though this series is not the introduction of the villain Thanos, it does tie into another potential plot element, the Infinity Gauntlet. The stone in Loki’s spear in The Avengers is the Soul Gem, which allows the user to control others. And in Thor the Infinity Gauntlet is seen in Odin’s vault. I have a hard time believing that they would not have left us a trail to this story without looking to adapt it in the future within the Marvel Cinematic Universe.

In 1991's Infinity Gauntlet, written by Jim Starlin and illustrated by George Perez and Ron Lim, Thanos acquires the Infinity Gauntlet formed of the entire set of Infinity Gems in order to fulfill his beloved’s desires. The full gauntlet makes Thanos more powerful than a Marvel universe God. He hopes to impress Death by killing half of the universe, in the blink of an eye! Earth’s heroes unite under the leadership of hero Adam Warlock, who is very familiar with the Soul Gem (he lived in it), to battle Thanos and attempt to save the universe from chaos and death. The following are speculative thoughts from the story that could have impact on a future Avengers 2, if it was actually adapted for the next movie:
Again, this is all nothing more than speculation and none of these guesses could come to fruition. But with two years to go, Infinity Gauntlet is an enjoyable book to visit and start building assumptions on a future movie. Let's be honest, this story could not become a feature film without major rewrites.  Even if none of these guesses come true, the story itself is an enjoyable superhero adventure sure to entertain fans of the Avenger Initiative.
Posted by Between Disney at 5:50 AM