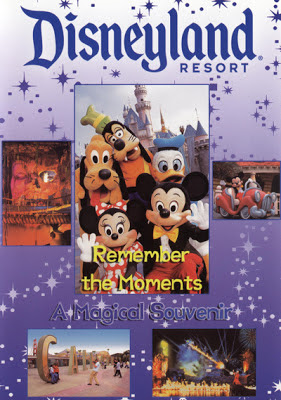 When the Between Family first visited the Disneyland Resort we picked up a DVD in Adventureland that I have not seen since. Disneyland Resort: Remember the Moments a Magical Souvenir provides a glimpse of the full resort including Disneyland Park, Disney’s California Adventure (DCA) as it was named at that time, Downtown Disney and the Disney hotels. Our tour guides Karen and Mile provide a land by land, park by park tour of the Disneyland resort with video and narration highlighting the attractions and features of the park. Additionally, facts about the current topic of discuss graphically pop onto the screen as the video plays. Honestly, it is a pretty straight forward promotional tour of the park. And this fact can somewhat be found in the special features which includes “Making the Video Guide”, “The Twilight Tower of Terror Time Lapse”, “Two Great Shows” which provides information about the Snow White and Aladdin stage shows, and “Traveling with Preschoolers”. Many of these would be useful to someone planning a trip.

The presentation is set around 2005. There are references to the Disneyland 50th anniversary, the Parade of the Stars which ran from 1999 to 2005, and Snow White an Enchanting Musical which ran from 2004 to 2006. For me this is a Disneyland that I never saw, despite that fact that it is relatively modern. For me that most interesting portion of the video is Disney’s California Adventure still in its youth. With a Sun Wheel, the Orange Stinger and the Maliboomer all prominently featured, it show me how much DCA has changed and greatly improved. It is amazing how quickly this park has matured.

I do not know if I would advocate purchasing this video. We picked it up in the park for a reasonable price and do not know if it is still available. A search on Amazon uncovered copies for $50. Now I will admit that the Between Kid really likes this title. But he likes it just as much as the most current Disney Parks Planning video, which is free. The value in trip planning is also limited since it almost a decade old. So, as much as I enjoy the early DCA video, financially I would not spend a lot on this window to the past.

Disneyland Resort: Remember the Moments a Magical Souvenir provides a peak at Disneyland in the years before I visited. I am sure for many of you, you remember this Disneyland Resort well. Viewing this again and again and again over the last three years has helped remind me that these parks do change quickly and for some of us a window looking a few years back is the only way we will see an era of the parks.
Posted by Between Disney at 6:18 AM