Dreaming Disney - Save the Clone Wars 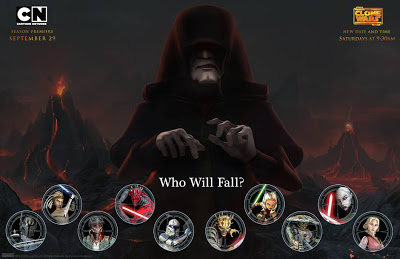 For the last few weeks, JimmyMac of RebelForce Radio has been warning us it could be Star Wars: The Clone Wars that could fall.

I was a big Star Wars fan before Disney bought LucasFilm.  Star Wars probably shaped my childhood just as much as Disney.

And I was super excited when the purchase was announced as it seemed a no brainer to put Star Wars: The Clone Wars alongside Ultimate Spider-Man and The Avengers: The Earth's Mightiest Heroes is a super action animated programming block.  And Star Wars: Detours would have been a fantastic fit next to Gravity Falls on the Disney Channel.  Honestly, with a voice cast that includes Dee Bradley Baker, Corey Burton, and Jim Cummings has Disney written all over it!  It just all seemed to be peanut butter and jelly, a prefect fit!

But alas it does not seem to be.  New stories are starting to break that Star Wars: The Clone Wars has been canceled.  There could be official news soon!  And honestly while there are season 6 stories in the pipeline and even season 5 episodes that have not seen the light, season 5 did end at a point that some may seen as natural.

So here are our options.  One we can sit around and know we did nothing as this Mousey program was put to rest before it could even reach a Disney network.  Or we can politely let decision makers know that we value this Disney franchise and look forward to more.

Let's join JimmyMac in writing a polite letter to:


You can also call 708-320-1RFR and provide your words of support which will be compiled on a CD RebelForce Radio is sending to Disney leadership.

We have seen a lot of changed in the last six months, but let's save Star Wars: The Clone Wars!
Posted by Between Disney at 9:08 PM