Between Books - The Art of Pixar Short Films 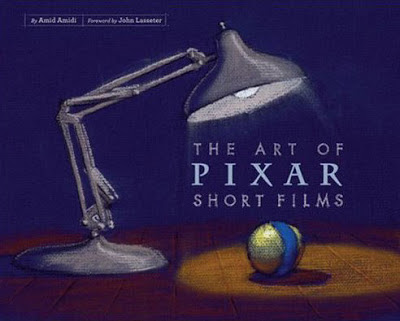 The Art of Pixar Short Films by Amid Amidi outlines the history of Pixar's shorts up until 2009, providing both history and concept art and stills.  The "Introduction" provides a brief history of each short's development with few images.  This is followed by over 100 pages of art without much narration.  The images include sculptures, concept art, storyboards and stills.  The following shorts are all covered by the book:
The Art of Pixar Short Films is well researched and really provides a short history of Pixar.  Amidi shows how the shorts were a platform to build both the technology and artistic skills needed to elevate Pixar to feature films.  Then with entry into full length movies, Pixar continued to see shorts as both a training ground for future big screen artists and a bonus for film audiences, a bonus that had historic precedents in the history of cinema.  It cannot be a called a complete history of Pixar however, with ownership changes for example not being mentioned.  But Amidi does provide a nice history of the shorts that he actually discusses.  There are a number of facts that I found enjoyable including that Ed Catmull was recruited by Disney at one point to design Space Mountain.  The featured art is fun, informative and displays the skill of Pixar's artists.

I am just now getting into the Art of books, so I am a novice in this genre still.  I did find the format different than volumes I have read in the past.  But the large blocks of narration helped keep a cohesive history.  Overall for me the history of The Art of Pixar Short Films is what has led me to consider this a necessary volume for those interested in Pixar history.
Posted by Between Disney at 5:42 AM