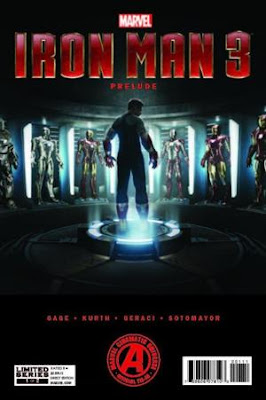 It was an easy sale to get me to pick up Marvel’s Iron Man 3 Prelude #1. I got it for free for The Marvel Comics App. I like free, free is good. I like Iron Man, Iron Man 2, and The Avengers, they are good. So clearly, I was destined to enjoy this as I prepared to see Iron Man 3, which I will have seen by the time of posting and assume I will have thought was good. Sadly, despite my excitement, I was found wanting in this issue.

Marvel’s Iron Man 3 Prelude #1 is written by Christos Gage and Will Corona Pilgrim with pencils by Steve Kurth. The tale intertwines itself amongst the events of Iron Man 2 and The Avengers. The real main character is Rhodey (James Rhodes) as he follows the leads to track down a terrorist named The Ten Rings, which has supplied terrorists with weapons globally. You will also remember them as Tony Stark’s kidnappers in Iron Man. The issue ends with a cliffhanger as Rhodey in his War Machine armor may have gotten too close to The Ten Rings!

Okay, so I do really enjoy the tie-ins to several Avenger Initiative movies. This issue, for example, does an excellent job at explaining why War Machine did not join the Avengers in New York. And it addresses that Rhodey stole his first armor and shows Stark handing over an updated armor to Rhodes. We also see a glimpse of my beloved Agent Coulson in the background. Additionally, The Ten Rings is a clear foreshadowing of Iron Man 3 and the Mandarin. So I do feel like those who are only fans of the Marvel Cinematic Universe could pick up this issue and instantly understand all of the background without comics. Co-writer Pilgrim served as a researcher for Iron Man, The Incredible Hulk, Thor, and Captain America: The First Avenger, so he knows this version of the Marvel universe.

But, I do have two criticisms. First, they did not go all in. Rhodey looks like a buff handsome super hero, which is noticeably different than Don Cheadle's more unstated body type. Instead, he does look like the Rhodey from the comics. And even though Iron Man is in the title, this is really a War Machine issue and I wish that either this was highlighted in the title or that Stark had less of a supporting role. Second, I wish they would have given me the full story in a single comic. The purpose of this comic is to make me more excited about a movie that I am already planning to see (or will have actually seen when you read this!). This title did not change my impression either way, so charging me $2.99 for the second half or $7.99 for a print version with the whole 40-some pages seems like overkill. Especially since the story did not have enough action for me to choose to purchase the next half. I already know that Rhodey makes it to the movie!

Sadly, I did feel a lack of excitement for Marvel’s Iron Man 3 Prelude #1. I felt very vanilla about it. It is the type of story I would expect kids who devour movie tie-ins to enjoy. But adults will probably not find the strands of a story that will get them excited
Posted by Between Disney at 5:49 AM