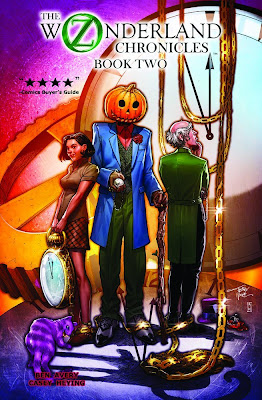 The second trade paperback collects The Oz/Wonderland Chronicles: Jack and Cat Special and The Oz/Wonderland Chronicles: Jack & Cat Tales. This sequel does not focus on Dorothy and Alice, but does react to the aftermath of the Jabberwocky attack on Chicago! The story follows Mae Mannering, fantasy author, who in the months after the original story finds herself with two unlikely traveling companions, Jack Pumpkinhead and Cheshire Cat. The trio discovers that the pumpkin and the cat are just two of many travelers from Oz and Wonderland and that a group of hunters are tracking the visitors. They three investigate the motivation of the hunters and help to uncover the connections between their three worlds.

Seriously, I love this volume. And it is still not fair to compare The Oz/Wonderland Chronicles to Fables but I enjoyed this story arc just as much as my favorite Fables’ tales. I honestly could not put it down (again to be fully transparent I am friendly with Ben Avery). But I finished this volume and immediately wanted more stories of Mae, Jack, Cheshire and the Wizard. Please Avery and Heying I need more!

In my mind, the authors were free to be audacious. They did use Alice, Dorothy, Oz or Wonderland as main story elements, allowing them to play in my opinion. I did not have preconceptions of how Mae should act unlike the other two heroines, and I was not trying to find Easter Eggs to her back story, instead I was letting the story move me. And by bringing Jack and Cheshire into our world I really think the authors were able to have fun showing how they would react to our world, familiar to us but not to this fictional duo. Watching Jack react to Star Wars and James Bond is more interesting to me than if we had followed Mae into Oz.

Additionally, the Wizard who has a large role in this story is more interesting to me than his doppelganger from Oz the Great and Powerful. The authors make it clear that this Wizard is an adventurer, a scholar, a magician a doer, a traveler and a man who is more than meets the eye. He is as complex to me as the Disney version is flat and predictable. He also shows that he is a man willing to sacrifice, a theme Disney seemed to miss in their version. I really want to see more of this character too and Avery and Heying have only built on my excitement I had for this character in their first offering. And I think it would be very exciting to watch Mae and the Wizard in new stories. Their dynamic would simply be interesting to watch.

As a Disney fan I will admit I did not know that Avery was such a big fan of Imagineer Tom Fitzgerald.  Fitzgerald has worked on a number of Disney Parks projects including Star Tours the Adventure Continues. The Wizard notes that he had a friend who once remarked, "If we can dream it we can do it."  Disney fans recognize this quote immediately from the extinct Horizons at Epcot Center.  Fitzgerald wrote this classic line, which some often attribute to Walt Disney himself.  Okay, I kid!  I instantly got the reference that the Wizard and Walt were friends, and of course I loved the idea.

The Oz/Wonderland Chronicles Book Two is a fast paced story that readers will fall in love with. I have talked to a friend who also read this volume and we came to the same verdict, this volume is fantastic. I want more tales of Mae and her companions. And I wish that Disney would take note of stories like this, because this is the type of adult fantasy that I want to serve as a companion to Once Upon a Time!
Posted by Between Disney at 5:40 AM