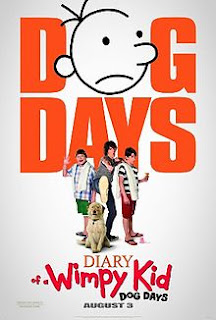 If you have a tween aged child, you are likely familiar with the Diary of a Wimpy Kid book series. I am pretty sure we have every volume in our home library. Yeah, the oldest loves the series, but what I did not realize was how much my youngest would love the original Dairy of a Wimpy Kid movie. I would constantly hear shouts from the Between Kid yelling, Zoo-Wee-Mama! In the Between House these three movies are hits, and I have to admit I really enjoy Roderick. As we watched the most recent installment Diary of a Wimpy Kid: Dog Days, which follows the misadventures of young Greg Heffley, I was thrilled I could declare this film Diary of a Mousey Kid:


I have to admit. Greg cannot seem to learn. He is a really bad friend and he lies constantly, and has done so since the first movie. I wonder if a Pinocchio trilogy would still have him lying so much in the third film. The good news is the movie does provide a great opportunity to discuss the consequences of lying as we watch the wooden boy lie on screen, I mean Greg in this Mousey Movie.

Posted by Between Disney at 5:54 AM