Between Books - The Art of Cars 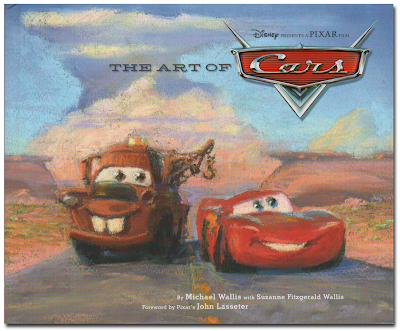 The Art of Cars by Michael Wallis with Suzanne Fitzgerald Wallis explores the artistic development of Disney/Pixar's 2006 Cars.  The Wallises put into the readers hands readers the production images, paintings and sculptures used to develop the rich world of Cars.  The authors explore both the background of American highways and Pixar's, especially John Lasseter's, love of the American automobile.  They discuss the extensive research completed by the Pixar staff including visits to NASCAR races, shutter Detroit automobile plants and down the real Route 66.  The books discusses how these influences came to influence Radiator Springs and the Cars' characters.

The Art of Cars is a very handsome book.  And as disappointed as I was by The Art of Meet the Robinsons, my expectations were met with this volume.  The text provides interesting background, but not so much to overwhelm the reader.  And as it should be the images are the star of the book, and there are numerous images of various types and styles to help satisfy the Cars fan.  Additionally they are arranged in a very pleasing way.

Michael Wallis has a special connection to the Cars universe.  He wrote Route 66: The Mother Road used by Pixar as a research tool.  Additionally, he lead Pixar's two Route 66 research trips.  Pixar was so impressed by Mr. Wallis that they designed Sheriff after his distinctive features, and he voices the character in both Cars and Cars 2.  It gives a very pleasing feeling knowing the author has such a special connection to the film.


What I liked most about The Art of Cars is seeing how these designs have Disney connections.  As one flips through the pages and sees the planned details around the map of Radiator Springs, the proposed early origins and the town's buildings,  one who has visited Carsland cannot but help but feel like they are reading about a place that they have been.  Then seeing the design of the flowers and other landscaping used both in the movie and the land further impresses the feeling that the theme park land was far from thrown together.  A highlight for me was a presentation of cone gags, all puns that I felt like Marc Davis would have enjoyed.

For fans of both Disney animated films and the Disney parks The Art of Cars is sure to be delight.  The images and designs found throughout the book are sure to give both a familiar feeling!  And for me it has helped to redeem the Art of style books.
Posted by Between Disney at 7:18 AM