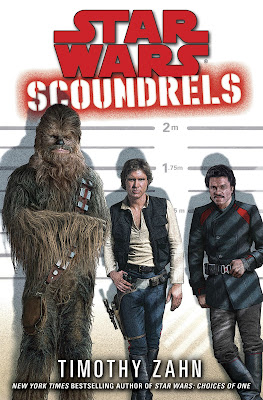 Recently I mentioned to a friend that I was planning on reading Star Wars: Scoundrels by Timothy Zahn. Despite the fact he really did not know much about the Star Wars Expanded Universe, his reaction was to say, “That’s what Disney is going to make the Han Solo movie from right?” After reading the book I would say, maybe, but some major rewrites would be needed.

Star Wars: Scoundrels is for Star Wars a small story. The action is almost exclusively on one world and the fate of the galaxy is not in the balance. Solo is recruited by Eanjer Kunarazti to recover 163,000,000 credits on encrypted credit tabs stolen by a local gangster on the planet Wukkar. Despite his rising star within the Rebellion after the Battle of Yavin, Solo is still a man with a price on his head. Seeing this as an opportunity to pay off Jabba the Hutt, Solo takes the job. The book follows Solo as he gathers his team, makes his plan, and attempts to steal back Eanjer’s credits. The Ocean’s 11 style caper sees the number of targets grow for Solo’s team as they add to the plan stealing the blackmail files of galactic gangsters Black Sun. Will Solo and his team make it out alive (okay you do you know that Solo is going to make it since this story is set before Star Wars Episode V: The Empire Strikes Back)?

This is the Ocean's 11 of the Star Wars universe. It is a true caper story. We get the whole setup of building the team, making the plan, and trying to pull it off. Unlike a lot of Expanded Universe stories it is a small tale. There is no major planet hopping with almost all the action occurring on Wukkar. And the story sticks to the main cast, where there is no attempt to pull Princess Leia or Wedge Antilles into a Solo story. There is one character, Winter, who will be familiar to even casual fans of the Expanded Universe but will probably be new to fans who have only seen the films. This does not distract for the story. For first timers, Winter’s role does not need background information and for those familiar to her it honestly makes her relationship to the Solo family, wink wink, even stronger.

I do worry that I had too high of expectations for this book. It is written by Zahn who really is the dean of the Expanded Universe. You generally cannot go wrong with a Zahn Star Wars tale. And though the book is solid, I at times found it bland! It was okay but it does not compare to his Thrawn trilogy. But I should not compare, with the Thrawn trilogy being an epic tale and this being a small story. Maybe it’s because the scope allows for more character and less action. I could have used faster more intense. And maybe I have become accustomed to action packed quick paced Zahn stories. The story could really use some faster more intense. It is nice to see Zahn’s efforts focused on an original trilogy character instead of relying on his own creations of Thrawn and Mara Jade.

The big question is would Disney use Star Wars: Scoundrels for one of the reported Star Wars standalones movies, I have had friends state they thought this was the Han Solo movie plot. Well, let me say it could happen but not without a lot of editing. Admittedly this formula is one that has shown to work on the big screen. And I expect that the Han Solo movie would probably be on a smaller less epic scale (though can anything with Solo not be epic). So I think some of the right elements are there. But I do thing the screenwriters would have to change the time frame of this story. This book is set after the Battle of Yavin (the destruction of the first Death Star in Star Wars Episode IV: A New Hope). And I do not believe audiences would buy a Solo story after those events that did not have Harrison Ford and Billy Dee Williams as their respective characters. And I think that the movie going audience would need to be introduced in the movie to Black Sun in a more comprehensive way. And I think the key scenes would have to transition more quickly on the screen. Unless you have read Expanded Universe stories or seen some key episodes of Star Wars: The Clone Wars, this criminal organization is completely new. But it is doable as a standalone theatrical release concept.

Star Wars: Scoundrels is the caper story of the Star Wars universe. Compared to other books by Timothy Zahn it is smaller and honestly slower. If one wanted to see Han Solo, Chewbacca, and Lando Calrissian in Ocean's 11, this may be the story for you.