Comic Corner - Guardians of the Galaxy #1 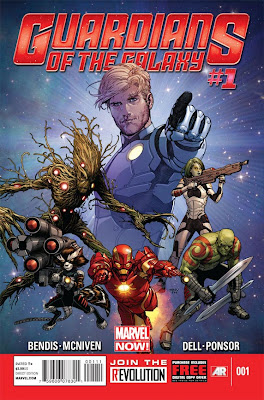 Disney and Marvel announced an unexpected choice for an August 2014 theatrical release for the second phase of the Avengers Initiative. The Guardians of the Galaxy is a hero team that most Disney fans are probably not aware of. And I will admit, even though I feel prepared by a childhood of nerdy for anything Marvel could throw at us, I actually confused this group with another, Corsair and the Starjammers, when I first heard the news. And I have a feeling I am not the only one who knows little to nothing about these space warriors that includes a space raccoon!

Marvel and Disney likely recognize this low public visibility for a property that they are preparing a tent pole movie around. I think the Guardians have less public visibility than John Carter! So I would argue some audience education is needed. This orientation has formally begun with the release of Guardians of the Galaxy issue #1 written by Brian Michael Bendis and illustrated by Steve McNiven. While the general public will probably not pick up this title, it should help to mobilize the comic book core audience. And with the inclusion of Iron Man in the story, they may attract some casual comic book fans also.

The book opens with Peter Quill, Star-Lord, attempting to win over a young lady of non-Earth origin on a space station. Peter is confronted by his father, the King of the Spartax planetary system, who warns Peter that Earth is off limits due to an agreement by a shadowy council of galactic rulers. Peter does not feel obligated to follow this edict due to his half human origin, his spiteful feelings towards his father and a fear that this pronouncement will actually but Earth at peril. Peter gathers his team Gamora (the most dangerous woman in the galaxy), Groot (a plant like creature), Drax, and Rocket Racoon (yes, he looks like a raccoon). The Guardians of the Galaxy arrive in Earth space just in time to join Iron Man in defending the planet against an alien attack. Can these heroes protect the planet?

I have a hard time recommending this issue. Honestly, it is the start of a bigger story and it is difficult to evaluate as a standalone issue. I assume that the whole will be better than its parts, but this piece is a lot of setup for the future. I fully intend to read the whole story arc when it is collected together in one volume, but I will not be picking up issue #2.

One problem I have with the story is the inclusion of Iron Man. The reason that the Guardians bump into Iron Man, who is joy riding, is based on a statement that Peter made to Tony Stark either in another title at an earlier date or off screen. But the comments that leads to Stark’s joy ride are thin and it comes off as forced. I would have been happier if the reason that Stark intersected with the Guardians would have been pure coincidence and had no links to Star-Lord and his team. I understand the need for Disney to make their number one superhero cross paths to bolster the 2014 movie. But in this story it failed for me. I feel really sad saying that since I generally enjoy Bendis’ writing.

This issue really focuses on Peter Quill and not the members of the team. One friend, and Between Disney reader, noted that Bendis frames Star-Lord as a Han Solo type character. He is a touch of rogue with a sprinkling of hero. Honestly, placing Quill into the Solo mold may be a good choice for Disney/Marvel as this is a formula that has proven to work. The rest of the characters, even the raccoon, are not given much space to develop their characters. Marvel has introduced a set of free online comics that focus on the non-human members of the team and help put flesh on Drax, Gamora, Rocket and soon Groot. I personally think this is a good marketing choice. The Gamora issue helps establish a tie to Thanos, a character we know will be a major focus in Phase 2 of the movies. The Marvel name will help Disney sell this film, but the audience needs to be introduced to these characters if they really do want box office success.

Honestly, I am hopeful for the cinematic Guardians of the Galaxy. It has superheroes and sci-fi so I want it to be a hit. I want to know more about the Guardians, because my personality desires more and more information. But instead of following this title on a monthly basis, I am going to look forward to a collected trade edition of this story arc.