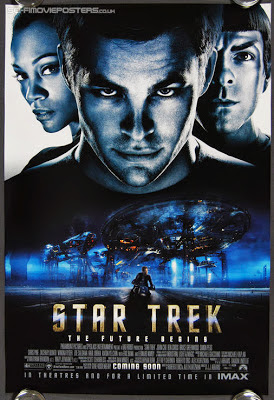 When I was growing up I watched my fair share of both Star Wars and Star Trek. Unfortunately, as time passed I met a girl, got a job, went to school, moved around, had some kids, bought a mini-van and watched less TV. When I returned from media silence, two loves ran to the top. One was Disney (of course) and the other was Star Wars. A lot of this had to do with being a father, since I could share these fandoms with my kids. I honestly have only watched one Trek movie in the last decade, and it was not that good.

In 2009 with director J.J. Abrams reboot/restart/continuation of the Trek saga with Star Trek, many of my friends were excited.

I did drag myself into a third run discount theater to see the film with a scratchy print and bad sound. The Between Tween who went with me loved it! I then destroyed the movie’s plot in front of the youngster, which may or may not have resulted in crying. I then promised to let the Tween watch something Star Wars to cleanse the mind. And then I thought this journey was over.

With the coming of the blockbuster Star Trek Into Darkness, I have largely felt left out of the excitement again. However, things are different this time around. I decided I wanted the film to do well, purely because it would help build the audience for Star Wars: Episode VII since they share a director. Despite my new found hope in the darkness, I was still not sure when I would personally see it. But when the Between Wife made a comment about wanting to see the 2009 film, which I believe was solely based on those blue blue eyes of Chris Pine, I acted.

2009’s Star Trek tells the story of how the crew of the U.S.S. Enterprise were brought together when facing an intergalactic emergency that threatens entire worlds. Federation recruit James T. Kirk is pulled into a battle against a disgruntled Romulan miner from the future named Nero. Our villain blames Ambassador Spock, played by Leonard Nimoy himself, for the death of his world. Nero chases Spock across time where they overlap with the younger version of Spock played by Zachary Quinto. The story shows us relationships growing amongst the core Trek characters while creating a new timeline in the Star Trek universe. And as the Between Tween pointed out in the first scene, Star Trek is Mousey:


Star Trek is a super mousey movie, even if I did not want to admit it. We did not even include Michael Giacchino who wrote the score; his Space Mountain theme is still my favorite. And I am willing to say it should not carry the horrible title I gave it years ago. But this time I turned off my mind, went with the flow, enjoyed the adventure, laughed with the Between Kids and most of all…..looked forward to Episode VII.

Posted by Between Disney at 5:32 AM