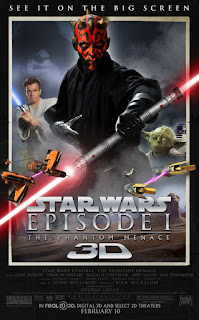 Star Wars is back.  I’m one of those geeky dads that took the release of Stars Wars Episode I: The Phantom Menace in 3D as an opportunity to share the experience of Star Wars in the theater with a kid.  The Phantom Menace may not be my favorite of the Star Wars movies.  And it has some plot devices that I may not be able to explain, cough cough metachlorians cough cough.  But I fully accept it as Star Wars, have watched it several times and see its place within the larger story of a galaxy far far away.  And of course all things Star Wars are Mousey to me, even if Disney does not produce or distribute these movies:
·         3D:  Hands down I believe that some of the best 3D experiences are Disney experiences.  Mickey’s PhilharMagic has ruined me for all other 3D experiences.  The Between Family went and saw Beauty and the Beast in 3D which was a little bit of a letdown as the champagne bottles during “Be Our Guest” did not shoot directly at me with puffs of air hitting my face!  Too much?  So slapping on the 3D glasses always makes me think of Disney experiences.

·         Naboo:  The planet of Naboo is featured heavily in Star Wars Episode I: The Phantom Menace.  And Naboo is one of the worlds featured in the 8 sequences in Star Tours: The Adventure Continues.  Naboo is not one of my favorite worlds in the Star Wars saga, but it may be my favorite planet in Star Tours due to the excellent use of 3D in the segment.  I’m back in my Starspeeder 1000 every time we go under the seas of Naboo!

·         Podracing:  A second segment from Star Tours: The Adventure Continues is Tatooine and podracing.  In Star Wars Episode I: The Phantom Menace we do not see any Starspeeders in the race.  But we get another view of the Boota Eve podrace.  The movie allows us to sit in the crowd cheering for little Anakin Skywalker, in the ride we get to be in the race.

·         A113:  In the final battle on Naboo I swear I saw a Trade Federation battle droid labeled A113 attacking Gungan Jar Jar Binks.  I smiled satisfied I had found an Easter egg from Pixar films and the work of CalArts alumni.  With the high amount computer generated animation in the film I knew I there had to be a connection.  But wait!  I’m sure my initial thoughts and those of some of the Internet is wrong.  The droid is not A113, but 1138 in my opinion.  This is a tribute to Star Wars creator George Lucas’ first film THX 1138 and not an animation classroom.  Here is the photo so you can judge it for yourself.
﻿﻿

I was asked, if Star Wars Episode I: The Phantom Menace really is a Mousey Movie?  As I wear my Star Tours t-shirt, playing with my Disney/Star Wars action figures and play catch with my Star Wars baseball bought in Downtown Disney (by you dude), I say you betcha.  I recommend you go see Star Wars Episode I: The Phantom Menace 3D while you can, relive the theatrical experience and share it with a youngling Between Disney.

Posted by Between Disney at 5:28 AM