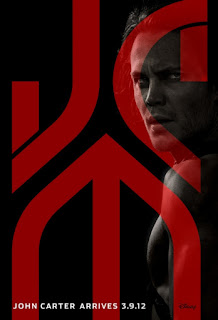 In March 2012, Disney hopes for a new blockbuster franchise with Andrew Stanton’s John Carter.  The movie tells the story of a Civil War veteran transported to Mars, or to the natives, Barsoom.  Carter discovers being born and raised in earth gravity that he has superhuman powers and becomes a renowned warrior amongst the Martians.
I have paid a lot of attention to this movie release for three reasons.  First, Andrew Stanton from Pixar is leading this effort.  This may be his first “live action” film, though can you really call a film with this much computer generated graphics live action, but other Pixar family members such as Brad Bird have been successful in live action offerings.  And I really want Stanton to succeed.  Second, I missed Pirates of the Caribbean.  I was very late to the party, like second movie on DVD late and with the original movie's run I completely was not part of the party.  So if John Carter is starting something bigger I want to be there.  Third, it has been interesting to watch the reaction to this film.  Some claim this will be a huge Disney flop.  I have to admit sometimes the trailers have been a little flat to me, though I really enjoyed the 3D version.  From those who have seen the movie the reaction has generally been highly positive.  I really wonder though if bad press can beat great word of mouth and hinder this film.

Though not an official trailer, this fan made trailer has gotten a lot of fans excited for the film's release.


I think part of the problem is that most moviegoers do not have a lot of background on the John Carter story.  Edgar Rice Burroughs, who also created Tarzan, introduced John Carter in 1912 in the serialized story, “Under the Moon of Mars.”  The story was published in 1917 in novel form as 1917 as A Princess of Mars.  Those dates are correct, yes this movie is based on a story that is a 100 years old.  And I will say for a tale that old, you will find the story to be engaging with interesting conflicts, characters, and cultures.  It was the cultures that shocked me the most as Burroughs carefully crafted his world and its interesting biological and societal rules.  I really recommend reading A Princess of Mars which can be found as a free EBook.
Disney realized that not everyone is familiar with the stories behind John Carter and its history so they have created this video to help orientate potential audience members.

There have been times that I have questioned my support but I am still being positive about John Carter.  It is based on enjoyable source material and has a director with a proven track record.  I hope other movie goers do the same and perhaps Stanton will have a chance for more Carter movies in the future.

"This post is part of the Disney Blog Carnival. Head over there to see more great Disney-related posts and articles.
Posted by Between Disney at 5:22 AM